"Seattle's a great place for big data and science in general," says Patrick Heagerty, professor and chair of the School's Department of Biostatistics, which tied with Harvard for the honor of top biostatistics program, according to US News & World Report's graduate school rankings. "It's really a great time for biostatistics and quantitative research." 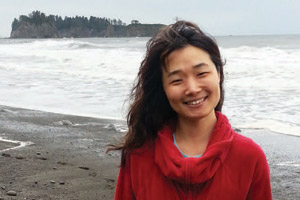 Woo does a wide range of planning and data analysis for her clients—pharmaceutical companies producing heaps of genetic data. "We identify the target genes," Woo says. "They develop the medicine to cure diseases."

"It's a good field," Woo says. "People are looking for biostatisticians. Even Microsoft has a genomics study team."

Heagerty says the department is continually updating its curriculum to reflect trends in big data and data science.

"We're developing a new pathway in data science, a new core sequence—a data science course, a machine learning course, and a bioinformatics course are part of it," he says. "I think our students need to know more about the data that's out there, such as procedure and diagnostic codes in electronic health records. They're already seeing genomics data in some classes and how to access and work with it."