Children in farm worker families are exposed to higher amounts of harmful pesticides from dust in the home than other children, according to a new study by researchers from the University of Washington School of Public Health. This is most notable in the thinning season, when farm workers are in direct contact with pesticide-treated fruit, and they transport residue into their homes on their skin or clothing. 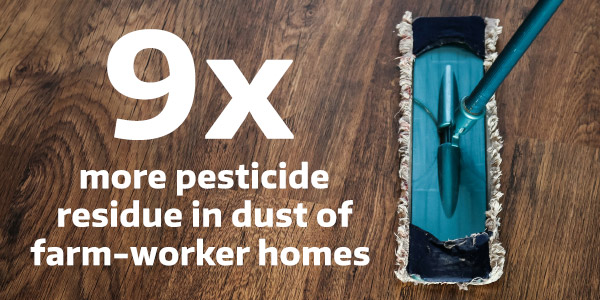 The study, published online Oct. 19 in the journal Biomarkers, examined the association between pesticides in house dust and their biological metabolites in urine, in both farm worker and non-farm worker families living in the Yakima Valley in Washington state.

Led by Elaine Faustman, professor of environmental and occupational health sciences and director of the Institute for Risk Analysis and Risk Communication at the UW, researchers found that farm worker households had up to 9 times more pesticide residue in house dust and 16 times more residue in dust in their vehicles than non-farm worker vehicles.

What’s more, children in these homes showed a two-fold higher concentration of certain metabolites in their urine in thinning season, indicating higher exposure to these compounds compared to other children in the same communities.

“The higher levels of exposures seen in children of farm workers suggests that farm workers are tracking pesticides home through an occupational take-home pathway,” Faustman says. “Reducing this exposure pathway is critical for protecting farm workers and their families.”

In related studies, the researchers have provided educational information and supplies to farm workers and their families to reduce this pathway, and found that children's exposures can decrease.

“Understanding and reducing such avoidable exposures to pesticides is critical since children are particularly vulnerable to the neurotoxic effects of pesticides,” Faustman adds.

The Institute’s Center for Child Environmental Health Risks Research has followed a community-based participatory research strategy in the lower Yakima Valley since 1999 to assess pesticide exposure among families of Hispanic farmworkers. Researchers from the center worked with a community advisory board on this new study, recruiting 100 farm worker and 100 non-farm worker adults, all with a child between the ages of 2 and 6 years. Farm workers worked on apple and pear (pome) orchards, while non-farm workers worked at schools, stores, daycare facilities or factories.

Parents and children participated in three data collection periods over the course of one year, from April 2005 through February 2006, which coincided with the three agricultural seasons typical of pome fruit cultivation – thinning, harvest and non-spray.

Researchers collected samples of dust in homes and vehicles, as well as urine, saliva and blood. Dust was evaluated for residue of five of the area’s most commonly used organophosphorus pesticides and urine samples were evaluated for the dialkylphosphate metabolites characteristic of pesticide exposure.

Co-authors of the study are Catherine Tamaro, Marissa Smith, Tomomi Workman and William Griffith, all from the Institute for Risk Analysis and Risk Communication in the Department of Environmental and Occupational Health Sciences at the UW. Beti Thompson, professor of health services and member of the cancer prevention program at the Fred Hutchinson Cancer Research Center, also took part in the study.