Eating salmon may be good for you, but catching them for a living could be hazardous to your health.

A study from the University of Washington School of Public Health finds that commercial salmon fishermen in Alaska suffer from hearing loss at more than five times the national rate, while facing higher rates of other health problems. 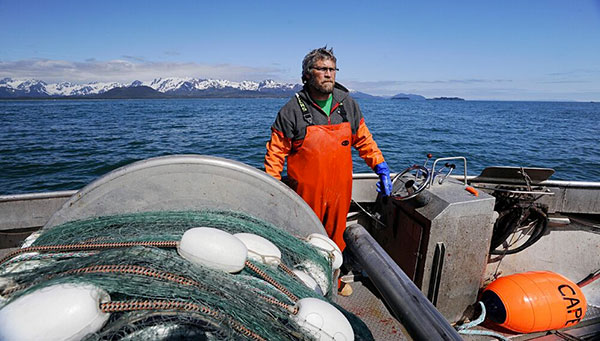 The study, published in the Journal of Agromedicine, surveyed and assessed a group of gillnet fishermen along Alaska's Copper River, who catch and sell what some call the world's finest salmon. The study was conducted in partnership with Alaska Sea Grant, which supports the state's coastal communities through research, education and technology transfer.

About 80 percent of fishermen who completed a hearing test had a pattern suggestive of noise-induced hearing loss, compared with the 15 percent norm for Americans. They also had significantly higher rates of upper extremity injuries, such as carpal tunnel syndrome and tendonitis, and were at increased risk for sleep apnea.

"Commercial gillnet fishing is difficult and dangerous work," said senior author Debra Cherry, an adjunct associate professor in the Department of Environmental and Occupational Health Sciences at the School of Public Health. "Gillnetting has unique risks compared to other types of fishing, especially for upper extremity injury. Fishermen have to set out and reel in the long net, and pick off each salmon." Cherry is also an associate professor in the Division of General Internal Medicine at the UW, and she directs the Occupational and Environmental Clinic at Harborview Medical Center. 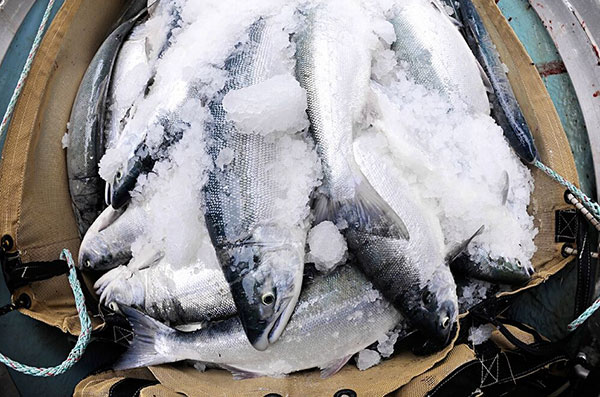 Copper River Prince William Sound Marketing Association
Harvested wild salmon are stored in fish holds until delivery. The holds are lined with bags to chill and store the fish.

The start of salmon fishing season on the famed Copper River in Cordova, Alaska, is met every May with fanfare from folks in the Pacific Northwest. The wild salmon is prized for its high fat content and rich flavor. Some 550 fishing vessels are licensed to use drift gillnets to catch salmon in the area. They're hung vertically in the water, drifting with the tide and current. Their greenish color blends with the ocean water so traveling salmon can't see it. These nets are up to 150 fathoms in length. That's one and a half times as long as the Space Needle, if laid on its side.

Cherry also points out the small size of typical boats used for gillnetting, which often have crews of only one to three people. "Fishermen are at risk of noise exposure because they're working so close to the boat's engine. It's just right there," she said. "However, many of the fishermen also had loud hobbies, such as hunting and snowmobiling, so we can't say for sure that their hearing loss was tied to their job."

As the fishermen age, these chronic health risks and others common to the general population, such as obesity and cardiovascular disease, may become increasingly important to the health of the workforce, according to study authors. Lead author Carly Eckert is a doctoral student in the Department of Epidemiology at the UW.

Researchers surveyed fishermen before and halfway through the 2015 fishing season, which generally lasts four months until September. Torie Baker, a marine advisory agent at Alaska Sea Grant, and members of Cordova District Fishermen United invited 600 fishermen to answer questions about medical and work history, sleep habits, alcohol and tobacco use, mental health, physical fitness and noise exposure. Twenty fishermen underwent a complete physical exam, where their hearing and aerobic fitness were tested. Some were also outfitted with Fitbits to track activity and sleep habits. 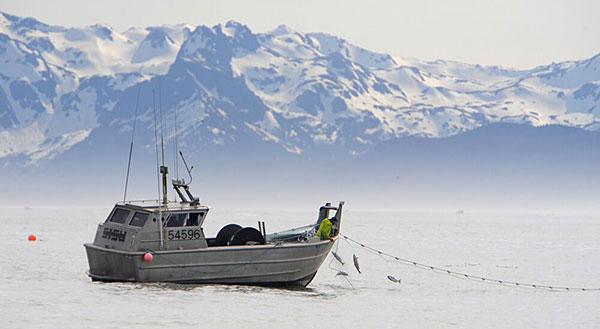 Nearly 80 percent of the fishermen considered themselves healthy and had evidence of above-average fitness before fishing season began. Compared to the general Alaskan population, study participants reported less tobacco use, more regular doctors' visits for health maintenance and higher rates of health insurance.

Seventy percent of fishermen in the study were overweight or obese, which is about average for the population of Alaska, and participants reported less aerobic exercise during the fishing season. This was probably due to cramped space on fishing vessels, which were usually 28 to 34 feet in length. Busy work schedules and excessive fatigue were also reported. Fishing periods usually lasted 24 to 48 hours, with little chance of sleep and unpredictable bursts of heavy activity. Depending on the catch, it could take several hours to pick and store individual fish.

"The fleet is self-employed. There is no corporate entity that protects them," Cherry said. "We need to be mindful of the risk, provide guidance to these fishermen and advocate for the promotion of the least risky work practices."

Prior studies of other fishermen have shown a higher prevalence of hearing loss, actinic keratosis (a precancerous skin condition), leukemia, fatigue and musculoskeletal injuries among the broad group.

Sixty-six fishermen took part in the preseason online survey, and 38 responded to the midseason survey. Most fishermen in the study were white males, at an average age of 49 with 27 years of commercial fishing experience. The U.S. National Institute for Occupational Safety and Health funded the study through the Pacific Northwest Agricultural Safety and Health Center within the School of Public Health.