Imagine two dozen jumbo jets crashing every week, killing all aboard. Then you'd have an idea of the scope of cardiac arrest in America, a leading cause of death. Every year, about 400,000 people suffer cardiac arrests at home, work or play. Unless their hearts are restarted within minutes, few will live. In a year, about 200,000 people suffer major traumatic injuries. Improving survival rates of both conditions is a major public health goal. 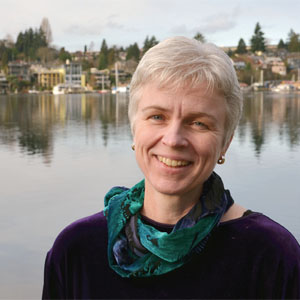 A center at the UW School of Public Health is coordinating efforts to study which emergency medical tools and techniques work best for reviving victims of cardiac arrest and traumatic injury. It's called the Data Coordinating Center for the Resuscitation Outcomes Consortium (ROC), led by Principal Investigator Susanne May, in the Department of Biostatistics. The center supports clinical trials and other research at 10 sites across Canada and the US, including Seattle. Thirty-five statisticians, clinicians, nurses, programmers, and administrators at the center design and conduct studies and coordinate data-collection from nearly 300 hospitals and more than 36,000 emergency medical workers.

So far, the study has about 10,000 patients enrolled; up to 23,000 are sought. "Because of the fact that few survive, we need large trials with lots of subjects to obtain a definitive answer," May says. Such real-world trials could lead to rapid widespread adoption of lifesaving techniques.

One challenge is protection of human subjects. Normally, people taking part in a scientific study must give their approval ahead of time. But patients with cardiac arrest are unconscious. Instead, ROC scientists inform the entire community of their research through ads in newspapers and on buses.

Another ongoing study evaluates the effectiveness of drugs given to patients whose hearts do not respond to electrical shock treatment. Up to 3,000 participants will be enrolled in that trial at nine sites. Both trials are set to end in 2015. Support comes from the National Institutes of Health, the US Department of Defense, the American Heart Association and several federal agencies in Canada.

So far, the ROC has completed 12 studies and published nearly 50 papers. Previous clinical trials have not shown that any of the new techniques or treatments under investigation have improved outcomes, according to May. But much has been learned from those studies, she says. "What you hope works is sometimes associated with a lot of costs or does not give you good results. Whether we prevent the use of inefficient treatments or help improve survival, both can have a huge impact."