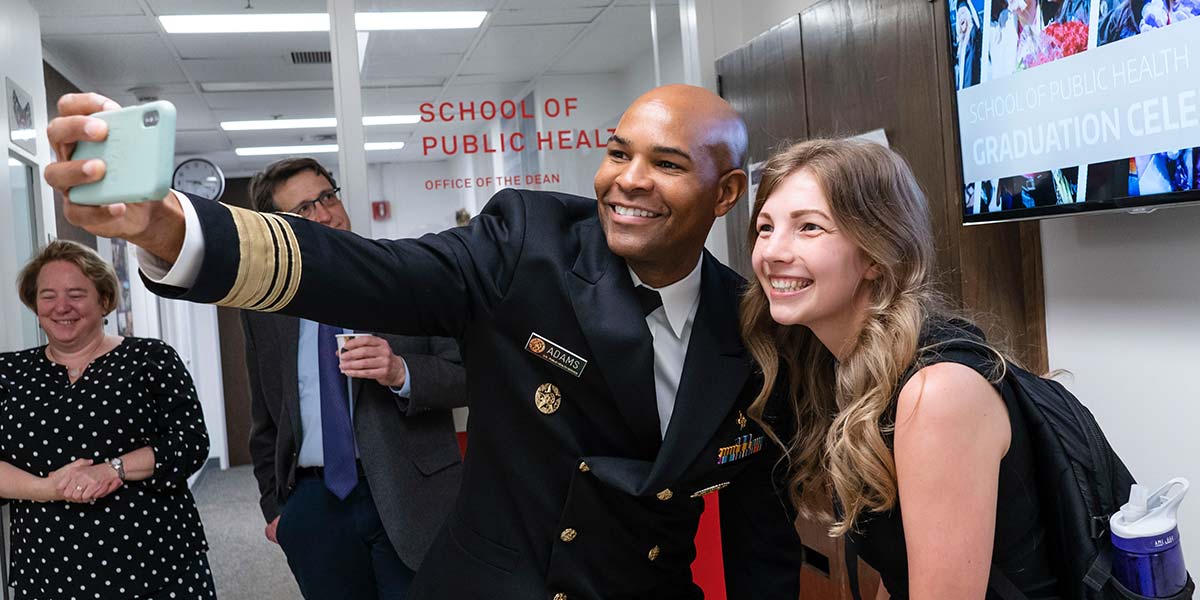 U.S. Surgeon General Jerome M. Adams visited the University of Washington last week to meet with students in the School of Public Health to talk about the nation’s opioid crisis – and to take a few selfies.

Opioids and addiction are among Dr. Adams’ priorities as the “Nation’s Doctor.” His latest initiatives have aimed at combating the worst addiction epidemic in American history through prevention, intervention and treatment.

“Prevention and treatment are critical in our response to this epidemic and I always welcome learning about what students are seeing in their research and training,” Dr. Adams tweeted ahead of the meeting.

He met with a dozen undergraduate and graduate students to learn how their individual research and practice projects relate to national efforts and challenges in addressing the opioid crisis. Topics of discussion ranged from addiction risk factors such as childhood trauma and mental health to the criminal justice system, homelessness and health equity.

Erin Morgan, a doctoral candidate in epidemiology and trainee at Harborview Injury Prevention and Research Center, explained her dissertation on the intersection of incarceration and suicide risk, including the role of opioids. In response, Dr. Adams shared a personal story about his younger brother, who is currently incarcerated and struggling with mental health issues and addiction. He emphasized the need for more drug-assisted treatment options for individuals in correctional facilities.

Undergraduates Amanda Tsang and Marcos Miranda, both in the Public Health-Global Health major, discussed a survey they conducted to measure support for supervised injection facilities in King County. They’re biggest takeaway: People generally support the approach, but not if proposed sites were in their own backyards.

After the lively conversation, Dr. Adams posed for photos with the students, Dean Hilary Godwin and others. He also took a few selfies to share on his social media accounts. 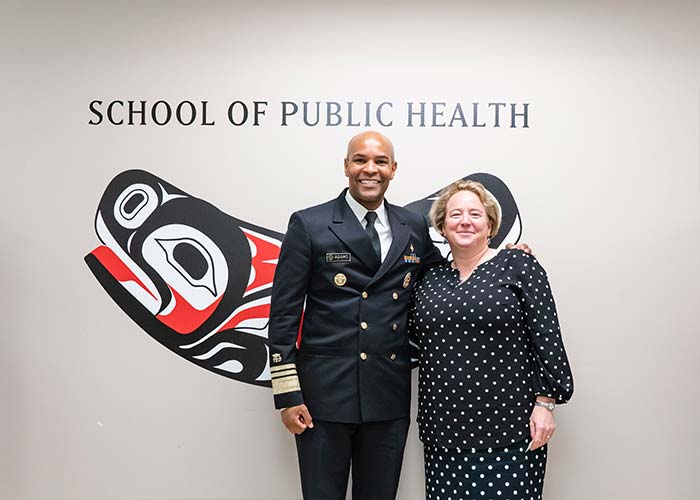 Dr. Adams is the 20th Surgeon General of the United States. He is also Vice Admiral in the U.S. Public Health Service Commissioned Corps and oversees the operations of about 6,500 health officers who promote, protect and advance the health and safety of communities in the U.S.

In response to the opioid epidemic, Dr. Adams issued the first Surgeon General’s advisory in 13 years, urging more Americans to carry naloxone, a medication that can reverse the effects of an opioid overdose. He also released Facing Addiction in America: The Surgeon General’s Spotlight on Opioids, which brought together the best available science on opioid misuse.