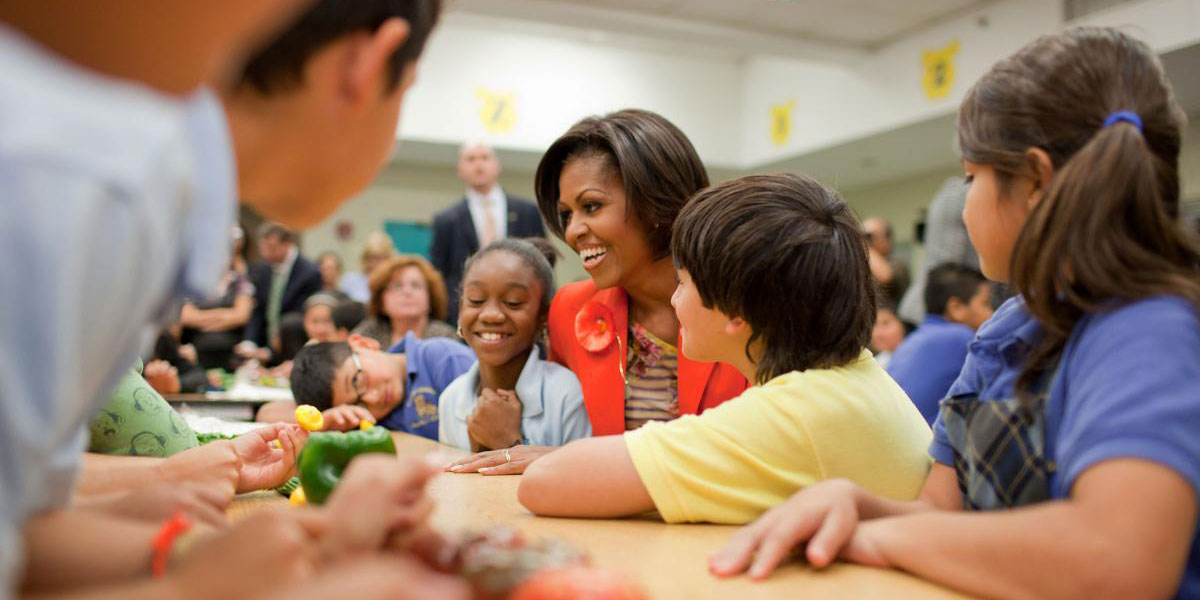 Since improved nutrition standards for school meals were put into action across the United States in 2012, children – especially those from low-income households – have been eating healthier school lunches with better overall nutritional quality, a study published July 28 in JAMA found.

The researchers, from the University of Washington School of Public Health, did not find the same positive changes in dietary quality among children who did not take part in the National School Lunch Program.

This is the first nationally representative study to assess specifically how the 2010 Healthy, Hunger-Free Kids Act – championed by former first lady Michelle Obama and signed into law by former President Barack Obama – impacted the overall nutritional quality of school meals eaten by students, rather than meals served.

“The evidence suggests that the policy resulted in improved nutritional quality of lunches consumed by students who participate in the National School Lunch Program,” said senior study author Jessica Jones-Smith, an associate professor of health systems and population health, and epidemiology, at the UW School of Public Health.

“The reach of the program is tremendous. Pre-pandemic it served over 30 million children per day, so improving the nutritional quality of foods served in this program could positively impact millions of children, if children actually eat the foods served. Additionally, this policy holds potential to more positively impact lower-income children, so our goal was to look specifically at the impacts by students’ income,” added Jones-Smith, also core faculty in the Nutritional Sciences Program.

The U.S. Department of Agriculture (USDA) altered the nutritional standards in 2018 to allow for fewer whole grains and more sodium and flavored milk. Then in January 2020, shortly before schools closed in response to COVID-19, the department proposed yet another set of changes to the policy to reduce the servings of vegetables students had to eat every week. According to a Jan. 17 press release from the USDA, the proposed changes “build on the 2018 reforms that preserve strong nutrition standards while providing schools the additional flexibilities they need to best serve America's students.” The 2018 rule was struck down in April 2020 by a federal court in Maryland.

"Our study indicates that for school lunch program participants, the policy as originally implemented was associated with significant increases in consuming dark green vegetables, beans, peas and whole grains and decreases in consuming refined grains,” said Kelsey Kinderknecht, a graduate student pursuing her Master’s in Public Health and Registered Dietitian certification at the School. “With the recent changes and proposed changes loosening the standards for these specific foods, these particular gains are at risk of being lost, especially for low-income students, since we know that low-income students receive greater nutritional content from school lunch than elsewhere.”

To conduct the study, Jones-Smith and Kinderknecht used food and beverage consumption data for 6,389 children ages 5 to 18 from the National Health and Nutrition Examination Survey. Students in the study attended schools that took part in the U.S. school lunch program before (2007-2010) and after (2013-2016) the school nutrition policy was implemented.

Researchers measured the dietary quality of study participants from three household income categories using the Healthy Eating Index-2010 (HEI-2010) score, where a score of zero indicated a diet that did not adhere to the 2010 Dietary Guidelines for Americans and a score of 100 indicated a diet that adhered fully to the guidelines. Participants were categorized using criteria for students that qualified for free (low income), reduced price (low- to middle-income) and full price (middle- to high-income) lunch.

The researchers agree that it is unclear whether they will continue to see the higher levels of dietary quality found in their study, particularly for lower-income children, if the USDA continues to change the nutrition standards of the original Healthy, Hunger-Free Kids Act.

According to Kinderknecht, other studies of the policy and nutritional quality have focused on changes in consumption of specific nutrients or food groups from pre-policy to post-policy. By using the HEI-2010 score in this study, researchers were able to assess changes in overall dietary quality with its 12 component scores.

“We think the improvements at lunch are large enough to shift the scores for the entire day and that students don’t negate the positive lunch trends by eating less nutrient dense foods at other meals,” Kinderknecht said. Future studies could more thoroughly explore the relationship between dietary quality scores for lunch compared with other meals, study authors wrote.