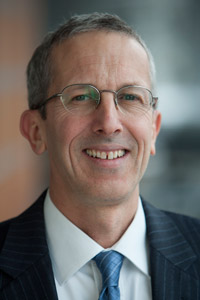 A pediatrician, Dr. Newman has had a distinguished career in global health, including leading efforts against malaria for the Centers for Disease Control (CDC) and the World Health Organization (WHO). He is a clinical associate professor in the Department of Global Health.

After earning his MPH, Dr. Newman joined Health Alliance International in Mozambique. That work was followed by nine years as an officer in the US Public Health Service, serving as chief of several units as part of the Malaria Branch of the CDC. His work included leading the President's Malaria Initiative, working to control malaria in 15 countries.

In 2009, Dr. Newman became director of the WHO's Global Malaria Program in Geneva. There, he redefined the global fight against malaria with improved evidence collection and analysis, and with a special focus on malaria prevention during pregnancy and infancy in sub-Saharan Africa. This year, Dr. Newman assumed a new role as managing director of policy and performance for the GAVI Alliance in Geneva, a global leader in providing vaccine access in poor countries.

Dr. Newman has published widely on issues of epidemiology, immunization, and international disease control efforts and has been a keynote speaker throughout the world. Dr. Newman received his BA in English Literature from Williams College (including a year of studies at Oxford University) and his MD from Johns Hopkins University. He completed his residency in Pediatrics at the UW - Seattle Children's Hospital in 1996, and stayed on to complete a National Research Service Award fellowship in General Pediatrics in 1998

Dr. Newman will be honored at a reception/lecture at the UW South Campus Center from 6 to 8 pm April 17 and will take part in a student roundtable from 11 am to 12:30 pm April 18 at the School of Public Health.