Public transit systems are lifelines that connect people to jobs, education and opportunity. And students at the University of Washington School of Public Health are working to give Seattle residents a bit more slack. 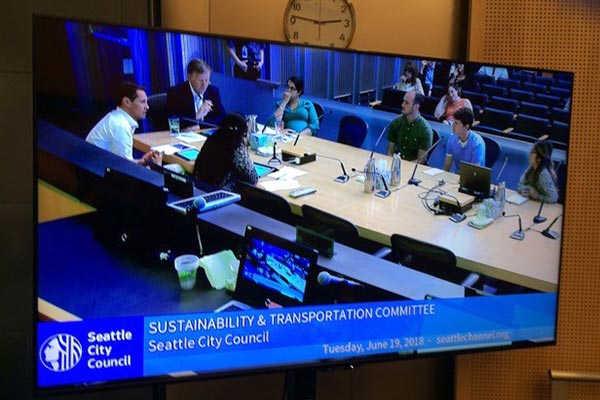 SPH students meet with the city council on June 19.

Students met with the Seattle City Council’s Sustainability & Transportation Committee last month to discuss ways to expand access to public transit benefits for low-income and small business workers. The city is exploring an opportunity that could save employees up to 40 percent off the cost of a transit pass.

“As public health students, we have a vested interest in transportation being equitable, affordable and accessible for the public,” said master’s student Gracious Gamiao during her presentation to the committee on June 19. “With Seattle experiencing unprecedented growth, it is more urgent.”

As the Seattle metropolitan area grows, improving the cost effectiveness, availability and use of public transportation has become a priority for local organizations and agencies. In the coming months, Councilmember Michael O’Brien plans to propose a Transit Benefits Ordinance that would require Seattle employers of a certain size to offer commuting benefits to their employees. This could be through an employer-paid subsidy, employee-paid pre-tax deduction or a combination of both.

“We get a lot of wins out of it,” O’Brien said during the meeting. Both employers and employees would save money, and it would be easier for folks to get and benefit from transit passes, according to O’Brien. 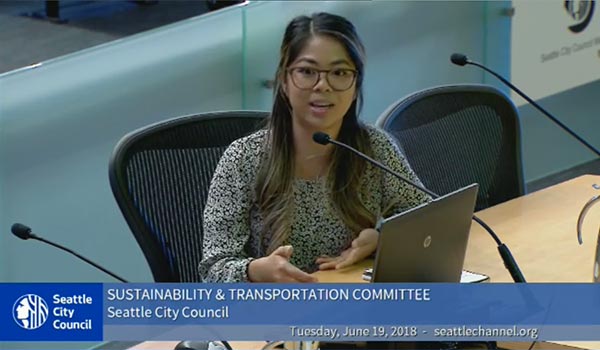 Over 10 weeks in the spring, Gamiao worked with fellow master’s students Stephen Walston and Jenny Paul to understand how small business owners feel about the pre-tax transit benefits. Another aim of the study was to learn about any barriers to providing the benefits. The students, all in the Department of Health Services, collected data via surveys as well as informal panel discussions executed with help from local business associations, such as the Ballard Alliance and Capitol Hill Chamber of Commerce. The final report was a collaboration with the City of Seattle, Seattle Department of Transportation, Commute Seattle and the Transit Riders Union.

A key finding was that most employers (about two-thirds) were not aware of pre-tax commuter benefits. One participant said it's "the best benefit nobody knows about." Many businesses expressed a commitment to their employees and thought transportation benefits were a good retention tool. However, barriers such as transit safety and accessibility were big concerns.

“Small business owners are interested in helping provide employees with affordable transportation benefits, but often lack the knowledge about what programs exist and how cost effective they may be,” said Paul, who admits that she was unaware about the benefits prior to the project. The study was conducted as part of the students' practicum and in tandem with a skills-based course called Planning, Advocacy and Leadership Skills (HSERV 572), taught by Associate Professor Amy Hagopian. 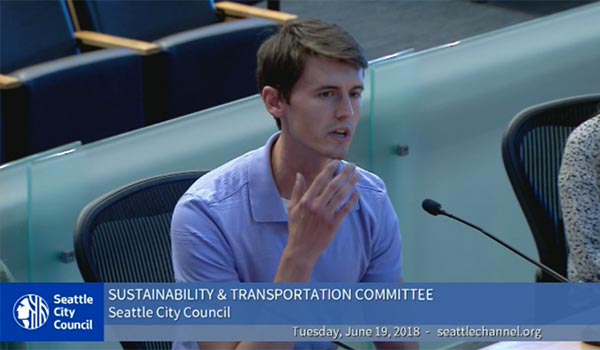 Seattle has done well to collaborate with nonprofit groups such as Commute Seattle and the Transit Riders Union that can educate and advocate for business owners and employees, added Paul. The students recommended that outreach with business associations be further developed to improve employer knowledge of pre-tax benefits and minimize barriers to future implementation. They also highlighted the importance of engaging with minority-owned and small businesses, pursuing creative marketing methods and learning from other cities that have implemented similar ordinances.

“Increased use of public transportation reduces both traffic congestion and automobile injuries. It also improves air quality and can increase levels of physical activity in communities, which reduces the burden of cardiovascular and respiratory disease,” said Walston, an internal medicine physician pursing his MPH at the UW.

In addition, employment is a well-known determinant of health and transit is the means of commuting for so many people in the Seattle area, he added. “Persuading more employers to offer commuter benefits is a fantastic two-in-one deal from the public health perspective.”