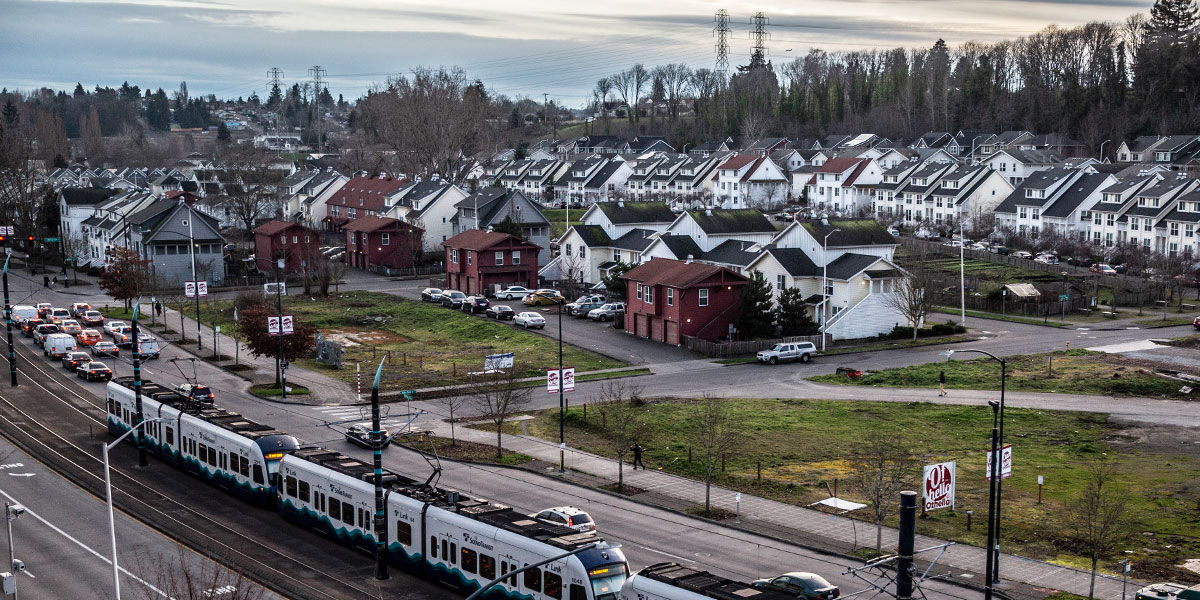 We tend to think of parks and other green spaces as encouraging people to walk. But a new study led by Steve Mooney, an assistant professor of epidemiology at the University of Washington School of Public Health, suggests that living in a dense neighborhood with places to walk to, such as stores and transit, actually might encourage more walking.

The research, published online in April in the journal Health & Place, found that housing density was the strongest predictor of walking frequency among Seattle-area residents across both high- and low-income neighborhoods.

The researchers tapped walking data from a separate 2009–2013 study tied to the opening of a new light rail station in Seattle. The 800 participants near the station and in comparable King County neighborhoods carried devices that measured their location and activity both before and after the new station opened. The research team used that information to count how many times people walked within about a half-mile of their homes.

Mooney also developed a new tool incorporating 146 neighborhood characteristics, such as tree cover, number of housing units, and residents’ race, age and other demographics. Because it uses publicly available data, this tool can be applied anywhere in the U.S. and updated over time, making it useful for epidemiological studies. Mooney, who is also associate director of the research core at the Harborview Injury Prevention and Research Center, is making the tool available to other researchers.

“Right now there are tons of studies that make different efforts to develop walkability measures,” Mooney said. “This study suggests that it's maybe not worth trying to create those more detailed measures of walkability, because simpler measures like residential density predict walking as well as more detailed indices do, but are available over place and time in ways that other measures are not.”

This walkability study also used a different approach than others. Rather than testing a hypothesis about what predicts walking, it analyzed “big data” to see what patterns emerged. That method is similar to studies that look for correlations between genes and diseases, Mooney said.

“As a scientist, I'm both interested in and cynical about these kinds of approaches,” he said. “There’s a reason we have scientific theory, but there’s also something interesting that can be found by just letting the data tell us what’s there.”

Another value of the study, says Mooney, is that it helps illuminate why people walk based on actual walking data, not just their stated preferences. That can inform city planning discussions and public health interventions. If one goal is to encourage physical activity, for example, increasing housing density and nearby retail might be more effective than adding parks.

Such planning decisions can have important implications for people’s health, since lack of exercise contributes to obesity, diabetes and other diseases.

“It would be nice to be able to make changes that are efficient and equitable to relieve the burden of inactivity,” Mooney said.

Mooney emphasized that the results need to be replicated in other cities. He and colleagues are working on a similar study in Portland. They are also using the new tool to see how neighborhood characteristics, such as proximity to transit, predict the success of programs promoting physical activity.

The study’s co-authors include UW researchers Philip Hurvitz of the Urban Form Lab; Anne Vernez Moudon of the Center for Studies in Demography and Ecology; Chuan Zhou and Brian Saelens in the Department of Pediatrics; and Ronit Dalmat, a PhD candidate in the Department of Epidemiology.