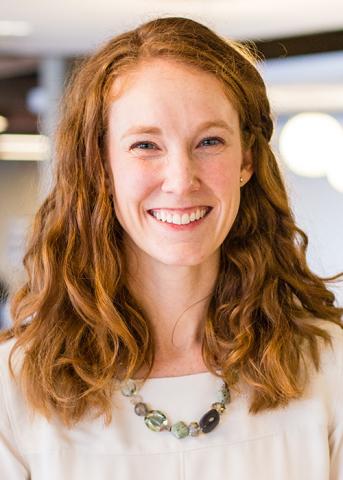 Erica Lokken graduated from the UW with a PhD in Epidemiology.

At 14 years old, Erica Lokken spent hours on weekends in a warehouse in Houston’s south side sifting through bags and boxes of donated medical supplies. She counted unused urine cups and bandages, tinkered with prosthetic legs and sorted syringes.

Lokken was a volunteer for a nonprofit seeking to bridge the healthcare gap worldwide, and the products she prepared were sent to health systems struggling to provide care to communities in need.

A doctoral candidate at the University of Washington School of Public Health, Lokken says this was her first exposure to global health and health equity issues. She has since focused her passion on uncovering one of the great enigmas in women’s health – bacterial vaginosis.

“I’m kind of a bug nerd,” said Lokken, who abandoned her childhood dream of being a ballerina to study community health and biology as an undergraduate at Tufts University. “I was able to study both the underlying biology and the complex social, behavioral and political drivers of health.”

She later worked as an operations and data lead for the Boston office of Peer Health Exchange, an organization that trains college students to teach comprehensive health education in public high schools. Lokken discovered her strengths in data gathering and research, and realized she could have a promising future in epidemiology.

“For a public health person with a love of numbers, epidemiology is the right place,” Lokken said. “It’s a cornerstone of public health decision making and that is exciting.”

The UW was an easy decision, Lokken says. She had heard of the School of Public Health and its Department of Epidemiology while studying abroad in Geneva, Switzerland. Donna Denno, a professor of pediatrics and global health and adjunct professor of health services, was there on sabbatical and often touted the tremendous research being done at the School. Also, the beauty and mountains of the Pacific Northwest pulled her in. 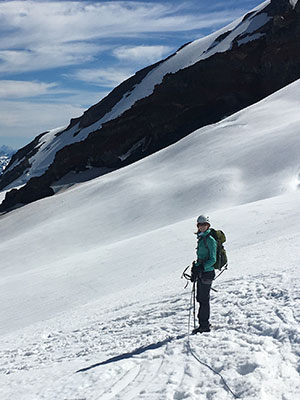 Lokken on the descent from Mount Baker.

Lokken now spends many weekends trail running, climbing and backpacking. She has begun to mountaineer and recently summited Mount Baker. She is also getting in touch with her Nordic roots, she says, and has taken up skate skiing.

At 6 feet tall with blue eyes and striking red hair, Lokken stands out in any crowd. This is especially true in Nairobi, Kenya’s bustling capital city, where she has spent time over the past year setting up a study to see how pre-conception vaginal microbiota affect a woman’s risk for spontaneous preterm birth.

For women, when the optimal vaginal microbiota get out of balance and unwanted bacteria take over, it can result in a common reproductive tract condition called bacterial vaginosis, or BV for short. BV is the most common cause of vaginal symptoms, with up to 30 percent of women worldwide having BV at any moment. These women are at increased risk for HIV infection and other sexually transmitted infections (STIs), including gonorrhea, Chlamydia and Mycoplasma genitalium. In pregnancy, BV has been linked to premature labor, but the exact relationship is still not clear.

The exhaustive study, led by Scott McClelland, a professor of medicine, epidemiology and global health, is believed to be the first prospective cohort study to follow women in sub-Saharan Africa from pre-conception through to delivery. Researchers will follow about 1,100 Kenyan women as they attempt to get pregnant, taking vaginal samples every month. Women who become pregnant will be followed until their babies are born to assess the impact of pre-conception vaginal microbiota on birth outcomes. Lokken has been involved in the study for two and a half years. She launched the fieldwork with the study team in Nairobi last February. 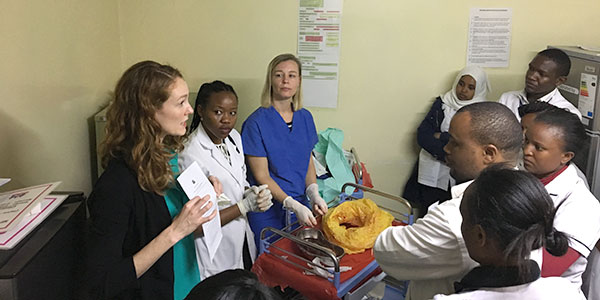 Lokken and Dr. Sophia Lannon in the Labor Ward at Kenyatta National Hospital, where they trained 50 labor nurses how to collect and document placenta samples.

“Every day starts off with a steaming pot of Kenyan coffee,” Lokken said on a Skype call last winter. “I create most days, which is great – whether it’s a data collection tool, a worksheet, a recruitment document or study procedure, a flyer or something to hang in the clinician rooms.”

She also wrote the protocol and built the study database. Once in the field, she worked closely with partners at Kenyatta National Hospital to hash out all the details, train research staff and begin recruiting participants. The research team has since enrolled 77 women, 20 of whom have become pregnant. The first two pregnant participants delivered in January.

“If the study identifies specific bacteria present pre-conception that are associated with spontaneous preterm birth, we may be able to screen women who are thinking about having a baby and treat them in advance of getting pregnant, to reduce their risk,” Lokken says of the study’s implications. “It’s a big and exciting study,” 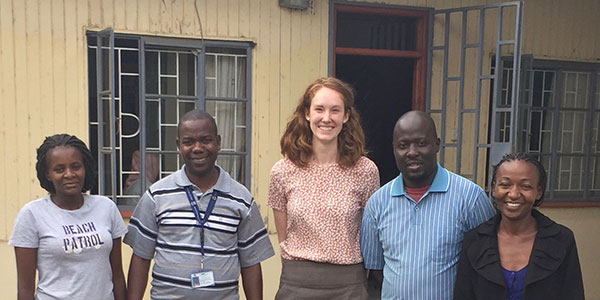 Lokken with the study team in front of the Couples Counseling Centre at Kenyatta National Hospital. Pictured L to R are Mephis Kamanda, Bernard Makau, Lokken, Clayton Salano and Gladys Waruguru. Some staff members are not pictured.

In a creative twist, Lokken was able to “nest” her doctoral dissertation within McClelland’s parent study, and will test the hypothesis that disruptions in vaginal microbiota are linked to a lower fertility rate.

“We’re covering so much of the reproductive cycle in Scott’s study,” she says. “I’m leveraging the rich pre-conception data to hopefully shed light on a woman’s time to pregnancy, as a marker for sub-fertility.”

Named the School’s 2017-18 Magnuson Scholar, Lokken said the award has given her “the freedom of time to explore important questions that impact the dissertation and its parent study.” She recently finished a project that found Kenyan women with higher body mass index, or BMI, were 20 percent less likely to have BV episodes. She presented her findings during the annual meeting of the Infectious Diseases Society for Obstetrics and Gynecology in Park City, Utah, in August 2017.

Each year, the Magnuson Scholarship recognizes one graduate student from each of the six UW Health Sciences schools and contributes $30,000 to their education. 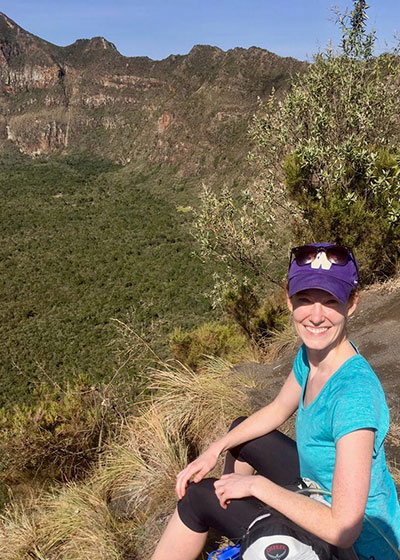 “What I really enjoy about the bacterial vaginosis world is that it sits at the intersection between sexual and reproductive health, allowing me to combine my interests in women’s health and the biology of disease,” Lokken says. Her first foray into this research field was as a master’s student in the Department of Epidemiology, from which she graduated in 2015.

For her master’s thesis, Lokken used data of female sex workers in Mombasa, Kenya, to study the link between BV and acquisition of M. genitalium. She discovered that women with prior BV were three and a half times more likely to get M. genitalium. Lokken received the University-wide honor of Distinguished Master's Thesis for the Biological/Life Sciences in 2015 and the study manuscript was published in the American Journal of Epidemiology.

Lokken has also completed 10 global health projects with the Strategic Analysis, Research and Training, or START, Center. Her projects focused on adolescent girls’ reproductive health in sub-Saharan Africa, tuberculosis (TB) transmission dynamics and adherence to first-line anti-TB drugs. She also worked on a landscape analysis of data sources and indicators addressing the status of women and girls globally to support the development of the Clinton Foundation’s No Ceilings: Full Participation Report.

Looking to the future, Lokken is excited to complete her dissertation. She hopes to one day contribute to improved sexual and reproductive health for women through cutting-edge epidemiological research. “I plan to use my training in epidemiology to help remove the barriers to women’s health worldwide,” she says.