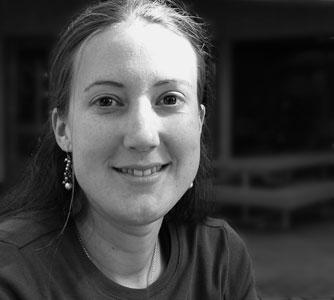 Preparation and opportunity sometimes come together. Lorelei Walker was "forged in stress," the daughter of performing artists who lived paycheck to paycheck. She decided early to follow stability and become a scientist. Now, Walker studies how stress can affect the health of future generations. She's part of an emerging field known as epigenetics.

Tells us more about what you are studying.

I'm interested in epigenetic transmission of information: how life experiences can be passed on to other generations. We're not talking about the literal DNA and its translation; we're talking about regulation of DNA.

How do you explain it to a lay person?

The easiest way I can think about it: Every computer has hardware and software. Maybe you're on a Mac, maybe you're on a PC; that would be a difference in DNA. And then every computer has software, and that's how we interface with our environment. I'm interested in how those experiences get recorded and embodied and how they affect the way we interface in the future. Epigenetics is kind of like the environmental footprint on the genome. 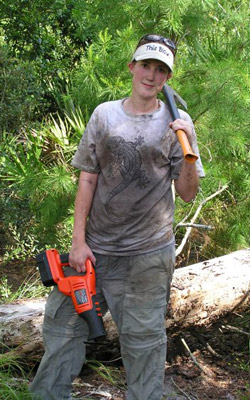 Building an enclosure for baby lizards in Florida

Why did you go into this field?

I grew up in rural Gettysburg, PA. My parents were entrepreneurs and they owned and operated five dance and gymnastics studios. They were living paycheck to paycheck without health insurance. If my mother was ill and couldn't teach, money didn't come in. They always provided for us, but I watched stress accumulate in my mother. She sacrificed her own health to make sure we got the things we needed.

I also taught five-to eight-year-olds and danced as well – ballet, jazz, tap. I think I decided early on I was going to be a scientist to understand how organisms interact in the world. When I was in college, I conducted a study of population genetics on lizards in Florida, volunteered at a homeless shelter and worked at an at-risk boarding school. I saw the outcomes of socially derived stress in one population and overmedication in another.

How does stress affect us over time?

Stress is interpreted in a portion of the brain where the emotions are processed. That not only helps that person determine how to act in the future, but it also triggers a physiological response in the body. If somebody screams at you, your heart races and your pupils dilate. If that stress is chronic, body systems basically burn out. It can lead to outcomes like cardiovascular disease and arthritis. What I'm most interested in is how those stresses, whether they're social or physical or both, can be transmitted to someone who has never lived in that environment. For fields like psychiatry, this is a game-changer. Now you're talking about historical traumas having a genomic imprint on future generations.

First we blamed things on our genes. Now it's society and history!

It seems overwhelming because researchers haven't worked out how that regulatory mechanism adapts to environmental stimuli. Most important for my interest is that it's not just about disease. There's a resilience factor there. It's very empowering for an individual to say: "Here I am and here are the cards I've been dealt. But through my social network and physical activity (just as you update your computer's software), I can do these things which actually buffer against stress and enhance what I have." 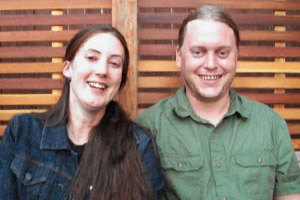 With Aaron Walker the night before they married last year

Why did you come to the UW?

I was in a rut in Florida, and I had the opportunity to move up here. I thought, Holy Cow. There was an Institute for Public Health Genetics? Such a thing exists? A year before I applied, I gained some good public health experience by volunteering with the Public Health Reserve Corps in Seattle and King County. They do everything from vaccinations at homeless shelters to disaster management. Seattle is a hub for public health, and UW is a hub for genomics. It was beautiful that both of those could come together in this program.

You received the school's Gilbert S. Omenn Award, which recognizes outstanding achievement and scholarship. What did that mean for you?

I was very surprised. It said to me the School of Public Health really values a program like the Institute for Public Health Genetics, which is vested in interdisciplinary research. The award spoke to the translation of public health research – that you can do all this research, but if you don't make the networks and relationships to move public health forward, then what is it all for?

My thesis. I'm also working at the Center for Genomics and Healthcare Equality and trying to set myself up for a partnership with the Interdisciplinary Center for Epigenetics, Science and Society, in Portland, OR. It's our sister institute, but I'd be a bridge person for the UW. I hope to investigate stresses, the environment, and everything that can have an imprint not just in utero but also during the first two years of a child's life. 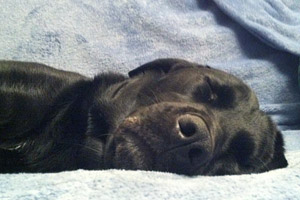 Cali, her dog, "the pinnacle of happiness"

I would love to focus on how stress is taken into the body, increasing outcomes of mental illness. One of every 10 people suffers from depression, and it's on the rise in developing countries. I think there are a massive number of people on this planet who, with some structural changes in their environment, could have a happy, productive, and healthier life.

What's your advice for students – especially on how to avoid stress?

You can't do it alone. Get in groups to study. Socialize. Find people who are like you and those who aren't. Go out and do things that are fun. Leave your computer. Understand the community you serve. You don't live in a bubble. You don't work in a bubble.

I need to take my own advice. (Laughs.) I take my black lab for a walk every day. She's the pinnacle of happiness. I've got my little Fitbit monitor, tracking my steps and walking. I stopped smoking last year; it was really hard. I spend a lot of time with my friends, talking with my family, and with my husband, Aaron. At night, we make it a point to be just humans: Sit down, eat a good meal, and watch the sunset. Decompress. Watch TV. Smile.