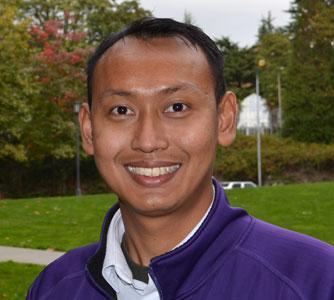 Myo Myint Aung followed in his father's footsteps to become a medical doctor in Myanmar, the long-isolated Southeast Asian nation now opening up after decades of military dictatorship. His experience providing care to survivors of a devastating cyclone led him to pursue a career in public health. Now he's in his second year of the Master's in Health Administration program, and plans to return to Myanmar to help improve access to health care.

How do you hope to help Myanmar with your MHA degree?

My future vision is how to make sure people in marginalized, hard-to-reach areas can access developed and functioning health care services that are sustainable and not dependent on the government. The structure of our health system is good, but we don't have the right people and the right amount of resources in the right places. Many people are in poverty and need help. We don't have essential drugs or medical equipment or enough medical doctors in rural areas. By learning the concepts and knowledge in the health administration program, I understand how hospital and health care services need to be strengthened. 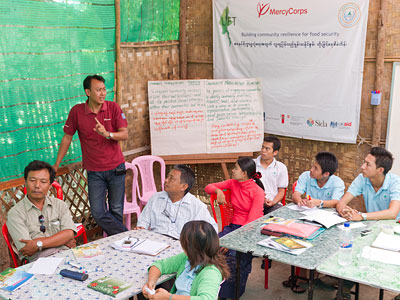 So the theory and practice here can be applied to Myanmar?

It can. But I don't believe it can happen right away. We have to strengthen the basic health system first. We need human resources development – not only doctors and nurses, but also medical technicians and administrative staff – and community-based health financing schemes. We also need better infrastructure such as roads, waterways and bridges.

How do you feel about recent changes in Myanmar?

I'm very optimistic. We've been living under a military agenda for 60 years. Now we have a rare opportunity to mention what we feel inside. I can see the excitement. People are openly criticizing the government in tea shops or posting crazy comments on social media. There are more vibrant discussions. President Thein Sein has an authentic, sincere attitude about making changes.

What do you think of democracy leader Aung San Suu Kyi?

She is the hope of the nation and I think she can lead us to a better place and a more developed nation. The main concern is whether people, especially youth, are prepared for the challenges ahead. People aren't thinking about what they can do for the development of the nation.

What are the other major public health issues?

Typical double burden of disease: Still struggling with communicable diseases such as HIV/AIDS, TB and malaria. Non-communicable diseases (cancer, hypertension and diabetes) are also rising. Humanitarian and emergency response issues, such as the ongoing ethnic conflicts in border areas. Another issue is the pharmaceutical sector – because people can't see the doctor, they just go and get medicine from the pharmacy. Drugs can be sold without any prescriptions – even antibiotics, which is crazy. It's tied to multidrug-resistance of communicable diseases. Patient safety is a big concern of mine. There are a lot of mishaps, and you can't litigate or sue the doctors. Medical professionals definitely need to take more responsibility for patient safety, quality and risk management issues. 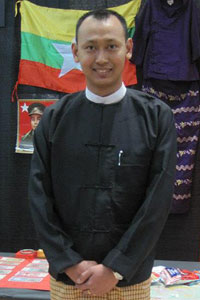 Wearing traditional dress on a cultural day for the UW Myanmar Student Club.

Why did you want to become a doctor?

My father is a medical doctor, and runs a private clinic in my hometown, Taungdwingyi, in the middle of the country. He motivated me. I looked up to him. I had worked in his clinic since middle school.

Really! What did you do as a boy?

I greeted patients, dispensed medicine (laughs) – under my father's orders. It was a family business. My mother helped my father. My father got a lot of presents. Rural people couldn't afford to pay him, so they brought local produce or bananas, but that was more precious than money. It meant they really loved my father. I wanted to have that kind of feeling.

It's hot and humid, in the middle of the dry zone. My hometown is very small and we are on the highway from Yangon to Mandalay. Historically, we have good poets from our area. We are known as the 'oil pot' of the country because we produce ground nuts, sesame and lots of edible oils. Culturally, we have some norms and beliefs you don't see in other parts of the country. For instance, we don't eat beef, but not for religious reasons. Cattle and ox are used to plow the lands, and we think that eating them is not good. They are our benefactors.

How have you adapted to American culture?

I've been pretty comfortable, but to be honest, I'm still struggling (laughs). I try to learn on every occasion. I've learned how Americans think. I'm amazed by the value they give to independence, speaking up and fighting for themselves. They try hard. Try to live the American dream. I was also amazed that independence also relates to family connections. Older people still want to live alone in a big house, unlike Asians. I admire that, but at the same time it makes me feel awkward.

Why did you choose the UW School of Public Health?

I received a Fulbright Scholarship and was accepted at three universities: Brandeis, Tulane and UW. The UW is one of the top universities in medicine and public health, and the MHA program is one of the top six in the nation. I also chose UW for geographic reasons. I thought Tulane was in a hurricane area. The Northwest seemed safer (laughs).

What was your role after Cyclone Nargis hit the Irrawaddy Delta in 2008?

I led an emergency response mobile clinic program in the hard-hit Labutta Township region. I supervised a nurse and health promoter. We went around villages with a boat and provided primary health care services, water sanitation and hygiene promotion, outbreak control and disease surveillance. That was a great experience for me – I was fortunate to live the history of an emergency from the beginning of the aftermath to the recovery period and development phase. 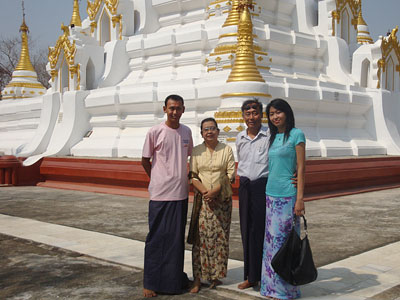 With parents and sister at a temple in his hometown on the road from Yangon to Mandalay.

It was very sad. The government totally neglected everybody. It didn't provide any food or water and even stopped people who wanted to deliver aid. We didn't have food for two days because we distributed all of ours to the victims! That was really tough. But it made me feel more drawn to the public health sector. I wanted to have a bigger impact on the community.

What do you do when you're not studying?

I've been volunteering at the Refugee Women's Alliance, educating Burmese communities on lead-paint poisoning and bed-bug problems. I did curriculum development and some training. It's only three hours of week of commitment, but traveling by bus to Kent from the U District takes two hours one way. So it's really seven hours a week. That's one of the expectations of the Fulbright fellowship. I came here not only for academic purposes; I have a responsibility to share the culture of the country and to give back to the community. I've also been promoting the needs of the health care sector in our country and have been actively engaged in relationship building with global health organizations in the US, like PATH and the Gates Foundation.

I swim and play soccer. I'd like to go camping before I go back.

Do you still have family back home?

My father and mother are still running a private clinic. My brother is a marketing manager in a real estate company. My younger sister is in Dubai, where she works as a flight attendant. She recently competed in Miss Myanmar 2013, part of the Miss Universe competition, and was a top 10 finalist. My fiancée is studying for a master of health policy in Australia. She's also a medical doctor. She's graduating at the end of the year. We plan to get married in 2015.