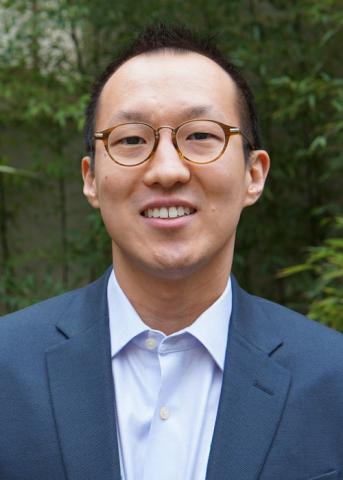 Phillip Hwang has fond memories of his grandfather, playing music together and learning to ride a bicycle. He also remembers what it was like to watch him suffer from dementia. His grandfather first struggled to feed himself, then lost his sense of taste and smell. One day, he didn't recognize who Phillip was.

Now, a UW School of Public Health doctoral candidate in epidemiology, Phillip is working to find new ways to help diagnose, treat and prevent Alzheimer’s disease and other dementias. His research has expanded what is known about the relationship between dementia and sensory impairment.

A recent study led by Hwang showed impairment of both vision and hearing increases a person’s risk of developing all-cause dementia by 86 percent and Alzheimer’s dementia by 112 percent. He presented the results at the Alzheimer’s Association International Conference in Los Angeles in July.

Ahead of World Alzheimer’s Day, on Sept. 21, we caught up with Hwang to learn about his research and his path to public health.

How did you become interested in dementia and Alzheimer's research?

I came to the UW because I was interested in studying cancer. I wanted to do research in conjunction with the Fred Hutchinson Cancer Research Center, a leader in cancer epidemiology. But in my first year, I took a class that got me interested in the brain and in studying dementia as a public health issue. There aren't a lot of epidemiologists in this field. I thought I could make an important contribution.

Also, my grandfather suffered from dementia. He was a very important person in my life – a sort of father figure. When I was young, my father passed away from cancer and my grandfather moved from South Korea to help take care of my family. Seeing him with dementia, and then ultimately die from dementia, motivated me to switch fields.

What does your research tell us about dementia?

Previous studies have linked single sensory impairments – either hearing loss or vision loss – to the development of dementia in older adults. There are also studies that have shown impairments in the sense of smell are associated with increased risk of dementia. My study adds to this by showing that the combination of having both vision and hearing impairments can significantly increase that risk.

Do we know why this is?

We have theories, but none of them are firmly established yet. These sensory impairments might cause dementia because they lead to social isolation or depression. They may even reduce a person’s ability to engage in physical and mental activities, which may, therefore, accelerate cognitive decline. It’s also possible that having these sensory impairments limit the brain's ability to process information.

This is the focus of part of my dissertation. I'm looking to see whether having visual impairments contributes to the risk of dementia among older adults with eye diseases. I’m investigating whether there's a biological mechanism between eye diseases and dementia risk that might be due to this visual impairment.

Are vision and hearing loss preventable?

They're treatable. For example, vision loss due to cataracts is treatable through surgery. Hearing loss can be treated with hearing aids. More research is needed to understand whether treating hearing or vision loss can modify the risk of dementia in older adults. That's another thing we don't know yet.

How could these findings be used to improve public health?

Having healthy vision and hearing function is something that should be promoted and supported among older adults. It’s something that older adults should pay attention to, not just in terms of future dementia risk. There are a lot of other health outcomes impacted by having sensory impairment.

The results may also help identify those at greater risk for dementia in the future. If an older adult comes into a clinic and is experiencing both vision and hearing loss, clinicians should pay more attention to the cognitive status and be on the lookout for signs of dementia.

Do we know what proportion of older adults suffer from both vision and hearing loss?

We don’t know enough to say for sure, but based on the studies I'm aware of, it ranges from 6 percent to 15 percent of the older adult population, depending on how researchers measure and define sensory impairments. The population isn’t particularly large, but hearing loss is already the third most common health condition in older adults. As our population gets older and live longer, the proportion of older adults who end up having both vision and hearing impairments will increase.

Are there any reasons we should be cautious with these results?

The study looked at participants who were originally involved in a randomized clinical trial. This was a volunteer, self-selected population, so it doesn't necessarily reflect the general population in terms of race/ethnicity, educational status, income or general health status overall. Also, the findings are based on self-reported measures of hearing and vision. They are not based on objective tests.

How do you support other students interested in dementia research?

I’m president of the Neurodegenerative and Aging Research Interest Group. I co-founded the group about three years ago with another PhD student to create a community for students in the School of Public Health who are interested in dementia and other aging-related topics.

What do you remember about your grandfather?

He was a very kind and talented person. I learned a lot from him. He was a great pianist. I remember playing the violin while he played the piano. He was also great at sports. He taught me tennis and how to ride a bicycle. He used to work as a principal for a school in South Korea, so he knew how to work with kids and how to support their development and growth.

Do you still play the violin?

I actually play in a trio with another PhD student and a professor in my department. We call ourselves the F-Wing Trio (named after the department’s location in the F-wing of the Health Sciences Building).