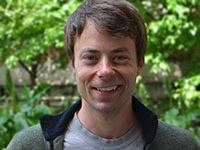 Arend Voorman, who received his PhD in Biostatistics in 2014, lined up a job with the Bill & Melinda Gates Foundation well before graduation. He'll be working with its polio eradication team.

As a statistician, Voorman says he will help the Foundation with risk modeling in order to prioritize resources, and also with surveillance efforts to help detect circulating poliovirus.