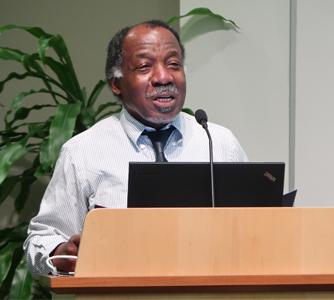 Black Lives Matter, hashtag activism, the Oscars, Babel and the legacy of Henrietta Lacks. We talk about all this and more in a new Q&A with Clarence Spigner. Raised in poverty and segregation in South Carolina, Spigner, a Vietnam veteran and three-time U.C. Berkeley alum, draws on real life experiences and popular culture to connect with students in unique courses on race and health.

What motivated you to develop the undergraduate Black Lives and Police Violence course?

Aside from the reality of so many unarmed African-Americans being gunned down by law enforcement, I was inspired by Michelle Alexander’s The New Jim Crow: Mass Incarceration in the Age of Colorblindness, which drew on the overlap of history, racism and government policies. I also read W.E.B. Du Bois’ The Souls of Black Folk and saw how police were the armed enforcers of the racial status quo in the post-Emancipation era. Radley Balko’s The Rise of the Warrior Cop revealed increased police power with the 1960s War on Drugs.

My own personal encounters with the police — such as one in Santa Monica, similar to the 2018 Starbucks incident in Philadelphia, where I ended up spending the night in jail — provided the realities. With the phenomenal Black Lives Matter movement, I thought the least I could do was help by teaching about racism in law enforcement on this predominantly white campus in a liberal bubble in the Pacific Northwest.

What happened in Santa Monica?

Sandra Bland committed suicide three days after being arrested by state trooper Brian Encinia. She hung herself in a jail cell. She likely took her own life after being humiliated, disrespected and man-handled. My point: Getting arrested for such trivial matters as being denied service in a fast food joint or demanding police officers identify themselves are not matters anyone would want to relive. In Bland’s case, it was not signaling when changing lanes. Police are allowed to use their own discretion; they arrest for arbitrary and capricious reasons. Mix in bigotry and results are the racially disproportionate incarceration rates we see. Like having survived a war, there is no desire to be re-traumatized from being humiliated, shamed and mortified. Bland was driven to end it. My arrests do not compare to the Sandra Bland tragedy, but being called names, hand-cuffed and locked up were horrific events. These occurrences are not what I want to re-live by describing them.

What do you hope students take away from the Black Lives and Police Violence course?

That student perceptions and beliefs are valid, even if I disagree. Students take control of their own education. They apply critical and informed thinking. Just as the Democratic Party is finding out with the inclusion of the dynamic Alexandria Ocasio-Cortez and the brutally honest Rashida Tlaib, diversity is challenging, just as it should be.

What topics do students confront?

We discuss coded languages such as “code of silence,” “I was in fear of my life” and “step out of the vehicle.” Frankly, it is for students using the problem-based learning format to figure out the significance for themselves. For me, “code of silence” is the police engaging in group-think as if they spawn from Orwell’s 1984. They willingly cheat, lie, change reports and threaten any dissenting voice to protect the rogue cops among them.

“I was in fear of my life” is used by all policemen as an automatic defense of having killed armed or unarmed African-Americans. It is a code understood by judges, juries and the general (white) public. Recall the two white, male cops who shot to death 130-pound and pregnant Charleena Lyles in Seattle in 2017. This was their defense and, in stating it, meant they acted within department guidelines. As African-Americans, we are vulnerable. “Step out of the vehicle” is all too often that last thing victims of police shootings will hear.

How are students challenged to think about these issues?

They team up to explore and present on aspects of race, class, gender, structural racism, institutional racism, sexism, homophobia, xenophobia and health. In coming together as a collective, students agree on what is known, provide the appropriate theoretical framework, agree on reference resources — such as experts, websites, books and articles — and give a final presentation with rigorous Q&A from peers and the instructor.

How does the course help students as they prepare for careers in public health, medicine or otherwise?

They get to explore social, political and economic determinants of health. Students learn for themselves that health does not derive from within the medical model. Health equity and equality in the U.S. market-oriented health system is, by definition, impossible. Students can come to this conclusion on their own.

Tell us about your Structural Racism course.

It's for graduate students. Aside from lectures and discussion sessions, the more unique aspects of the course include an exercise called "the public sphere," where students select a book, motion picture or TV program and address the influence of mass media on individual thought. We also do what I call "College Bowl," an intellectual game show of public health significance.

Speaking of mass media, what do the Oscars tell us about how far we’ve come as a society regarding race relations?

Hollywood is still ruled by a white, old-boy network. #OscarsSoWhite protested the underrepresentation of people of color in the annual Academy Awards, and it renewed the phenomena of colorism and white-washing, which have always been in the media. The difference now is that people are listening more to each other and not just what is presented by the entertainment corporations.

As with Moonlight, Get Out, Black Panther and Crazy Rich Asians, white viewers proved they don’t need to see themselves as the protagonist or white savior. Did they ever? Mira Nair proved the point in her 1991 romantic drama Mississippi Masala and such has been the case with Spike Lee’s films. Nevertheless, Hollywood is a commercial enterprise and less an art form, so if a movie makes money, the men in suits will endorse it. Dare I say, some things are changing, while much remain the same.

How do we measure a student’s competency in anti-racist thinking and practice?

What inspired you, in the early 2000s, to develop what may be the first college course on campus rape, based on the novel I am Charlotte Simmons?

I saw my teenage daughter reading the novel. As a fan of Tom Wolfe, I found I identified with the protagonist. I was also raised in poverty and a first-generation college student. I was in the painful situation of being a Vietnam vet on the U.C. Berkeley campus.

How has course dialogue about sexual assault changed in the #MeToo era?

Students across race, gender and religions are willing to speak up about it. The hashtag itself is a product of empathy. The problem-based learning approach allows students to take on this difficult and timely topic. There is a line from the 2006 international film drama Babel: “If you want to be heard, listen.” As a professor, I follow this advice and it works.

In your course The Immortal Life of Henrietta Lacks, how do students come to terms with a range of issues, from health disparities and distrust of medicine to current and future health needs?

An award-winning book, The Immortal Life of Henrietta Lacks covered history, culture, race, racism, gender, social stratification, crime and exploitation. The inequalities in access to health care experienced by the Lacks family are similar to the plight of Celie in Alice Walker’s The Color Purple, Bigger in Richard Wright’s Native Son and Malcolm in Alex Haley’s The Autobiography of Malcolm X. Students can identify with these protagonists and experience the social, physical and emotional events that influence their health and well-being.

Are your life experiences relevant to the courses you teach?

Life experiences must be held in check if they become outdated and boring war stories. Spending jail time in Santa Monica and in Berkeley (yes, there as well) and being stopped by campus police at U.C. Berkeley, the University of Oregon and the UW can serve as examples of racial profiling. My service in Vietnam also reflect the only choice made by Charlotte’s childhood friend having to go into the military. Stories about having to pick cotton to buy school clothes can come across like ancient history until students who are children of migrant workers raise their hands in agreement.

The Spirit Catches You and You Fall Down by Anne Fadiman

The Immortal Life of Henrietta Lacks by Rebecca Skloot

The Souls of Black Folks by W.E.B. Du Bois

The Emperor’s New Clothes: Biological Theories of Race at the Millennium by Joseph L. Graves