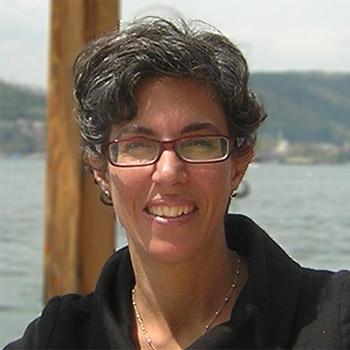 Donna Denno is a pioneering online teacher for the UW, but she rarely posts a lecture. She tells us how she teaches and what drives her to protect vulnerable children across the globe.

Why did you want to become a pediatrician?

I went to Ghana as a medical student, and was really struck by the vulnerability of children there. Globally, children die from diarrhea and pneumonia, which are highly preventable and treatable. That really compelled me. I later returned to KNUST, one of the two medical schools in Ghana, as a faculty member for two years.

What are the biggest issues in maternal and child health?

The number of child deaths (under 5 years of age) worldwide has dropped from 12.6 million in 1990 to 6.6 million in 2012. Still, two-thirds of deaths can be prevented with fixes that are not expensive or high-tech. They are things like oral rehydration solution for diarrhea and antibiotics for pneumonia. As mortality rates decline, it's important to not become complacent. After all, health is not just the absence of death. Common diseases can lead to long-term consequences. For example, recurrent diarrhea can lead to intestinal dysfunction and poor nutrient absorption among children who are already at risk for food insecurity. This can lead to stunted growth, delayed development, and reduced adult human potential.

Maternal and child health inequities are increasing. In many countries where overall child mortality rates are declining, death rates among the poor are going up. Aggregate health statistics are insufficient; we need to also look at within-country differences by geography and socio-economic status.

Where does your passion for underserved populations come from?

Growing up in Detroit I noticed early on differences in the way people are treated and the way people live based on racial and economic backgrounds. In King County, we have a terrible and increasing inequity problem. At a time when our economy is improving, we are facing budget cuts that are going to slash public health services, including deep cuts to public health nursing and maternity support services—the exact type of interventions that can improve the health of poor children in the long run. I bring this up because some of the same problems that exist in Ghana or other resource-limited countries are the same barriers we face here: policies that prohibit poor people from gaining access to services that will improve their health.

My Iraqi-American heritage also played a role in my interest in global health. I visited family in Iraq as a kid and had an appendectomy there. The health system was extremely well functioning at that time. It is a tragedy that political circumstances destroyed the health care system.

When were you last back in Iraq?

I went in 1989, between the Iran-Iraq War and the first Persian Gulf War. I could never have predicted what happened. It's just astounding. People were so happy the Iran-Iraq war had ended. They were so hopeful about the future. It was shocking to me how quickly things turned around. There has been a lot of suffering. As health care and public health professionals, we need to advocate for policies that promote health and we need to advocate against policies that constrain our colleagues in developing countries from delivering the care that they want to deliver. To me, the biggest impact I can make is as a citizen advocate.

You were a pioneer when you start teaching online in 2008. How did you get started? 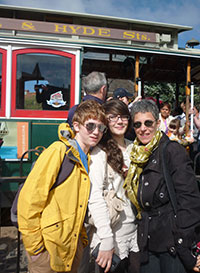 The eMPH program (for working professionals) was interested in offering global health classes. I was just moving to Geneva (where I consulted for the World Health Organization on child health and immunization issues), so the online format was the only way I could teach. It forced me to jump in.

What were your biggest challenges?

At first I was nervous, because I don't consider myself a technophile. Also, I really like engagement with students and was concerned about that. But I found was that it wasn't difficult to master the technical skills with proper assistance. The engagement with the students was in some ways even more than what I experienced in the traditional classroom. I get to know the students well; it is very satisfying.

How do you keep them engaged?

The interactivity is primarily through discussion forums. It works very well. It's a small class, up to 15 students, and they are in there and talking. My role is is facilitating discussions – asking questions to further prompt discussion or relating some of my own experiences.

What are you doing that's innovative?

Not relying on lectures. I try to identify the best materials, whether they are documentaries, readings, blogs, or lectures someone else has given. There's not always a reason for me to create a new lecture. Using documentaries that help students visualize real-world practicalities coupled with a more academic reading often can be a better educational tool than lecturing at people.

"The End of Poverty?" and "Life and Debt" – about underlying causes of poverty and poor health, The PBS series "Rx for Survival," a UNICEF/BBC documentary about community-based neonatal care in India and Kenya, and a film developed by Health Alliance International for itsTimor-Leste birthing facilities program. 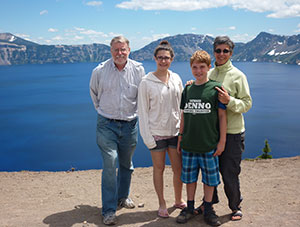 With husband, Charles Mock, and children at Crater Lake

Have your techniques changed much?

The same general approach has seemed to work well – 10 weekly sessions, forum discussions, ungraded quizzes on technical content, and skills-based products – for example, a proposal to implement a specific project in a specific setting or a memo advising a minister of health on a controversial topic.

Teaching online sounds like it's a lot of work.

There's a misconception that it could be a timesaver. I don't see it that way. It's not just a matter of slapping some taped lectures from an in-residence class online and walking away.

You have just become new Co-Director of the eMPH program.

eMPH has served the public health community for 34 years. I am excited to serve as Co-Director to help the program grow and respond to new challenges and opportunities.

Tell us about the in-person course you teach.

I teach Maternal Child Health in Developing Countries, with an enrollment of 30 graduate students from across multiple Departments and Schools. I'm using active learning techniques—some of the same techniques as in the distance course—use of video documentaries as an assignment and then discussing/debating portrayed concepts in the classroom. It definitely requires the students to be actively engaged.

I have two kids – a 17-year-old daughter and a 13-year-old son – and I love to spend time with them and my husband, Charles Mock, who is also UW SPH/SOM faculty. I enjoy hiking, cross-country skiing, gardening, movies, and reading all sorts of fiction and nonfiction.