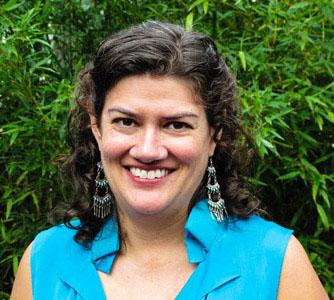 India Ornelas has been committed to social justice since high school. Today, she works on interventions to reduce binge drinking among Latino men and enables Navajo communities to grow more vegetables. She also works to create a culture of diversity at the School of Public Health.

What kind of research are you doing?

I study how social determinants of health influence the health of mostly Latino and Native American communities. My research looks at how and where people live, the stressors they face, and how that impacts their health.

What kind of stressors?

For Latinos, stressors are associated with discrimination, their legal status, not knowing the language, adjusting to life in the US, struggling with poverty or low income, or living in communities where they might be socially isolated. I've found two common ways stress shows up. For Latino men, it's unhealthy alcohol use. For women, it's depression.

Five or more drinks on one occasion amounts to binge drinking. In some groups of Latino men, it's almost 50 percent, more than twice the rate in the general population. Latinos tend to drink less often than other racial/ethnic groups, but when they do drink they tend to drink more. We're trying to help them understand how to drink less and more safely.

What are the strategies?

Goals can be as simple as a man carrying a picture of his daughter in his wallet before he goes to buy a six pack. It reminds him of how his drinking might affect his relationship with his family. Or we could have them focus on drinking less or in safer places so they're not driving. A lot of the men are worried about interactions with law enforcement, as many are undocumented.

"We can't achieve excellence without diversity"

How are you researching this?

Over the last two years, I've been working to culturally adapt an evidence-based intervention called Alcohol Screening and Brief Intervention. It's typically used in primary care settings to address a patient's unhealthy alcohol use. Even a short conversation can be effective in reducing unhealthy drinking. Because many Latinos do not have access to primary care, I've taken that idea and brought it to a day labor workers' center.

We give them personalized feedback because many of them don't even know their levels are unhealthy, how their drinking might affect their ability to work, and at the end, we help the man make a goal about reducing the drinking. We're trying to empower men to live a life with less alcohol use.

Our next step is to test that intervention in a randomized study with Casa Latina, one of the community partners I work with. We just received a three-year grant of $430,000 from the National Institutes of Health to conduct a pilot feasibility test.

What kind of work are you doing with Native Americans?

I'm doing two studies as a collaborator. One is with Bonnie Duran, testing an alcohol screening and brief intervention in tribal colleges. The goal is to train staff to provide this kind of counseling with their students. We're also culturally adapting that intervention for Native Americans. With Shirley Beresford, I am working with the Navajo Nation in New Mexico to develop community gardens. That's been a really wonderful and rewarding project. 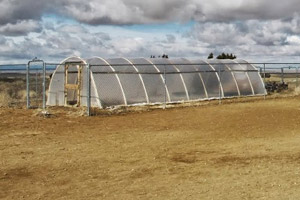 What's the purpose of the gardens?

To see if we can increase access to vegetables. The Navajo Nation is very rural. People have to drive long distances to get to stores that carry fresh fruits and vegetables. We're trying to get people to grow their own. It's a partnership with the University of Washington, the Fred Hutch and New Mexico State University.

What kind of vegetables?

Corn, squash, tomatoes – the horticulturalist we're working with can make a lot of things grow. He teaches how to amend the soil, use aeration, and use a hoop house as cover so vegetables can grow year round. It protects from the winds and the cold on the high desert plateau. We also are installing/teaching about low-water use irrigation like drip irrigation. 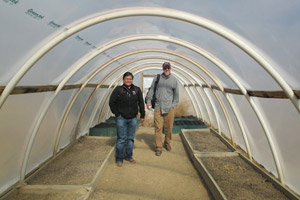 Inside the hoop house

Not yet, but we're getting people to come out to workshops. Some of the gardens were decimated by prairie dogs (laughs). We're dealing with some unforeseen challenges.

I discovered public health as an undergraduate, taking a public policy class about health care reform at the time. Public health allowed me to combine my interest in social science and math and statistics. All of my training has been interdisciplinary. I just love that about public health. You get to do a lot of different things.

What made you passionate about social justice?

It just strengthened as my identity developed. I'm third generation Mexican-American and also queer. As a member of these communities, I've always been committed to working with vulnerable populations.

You're heavily involved in diversity efforts at SPH. How do you define diversity?

"We need diverse perspectives in the classrooms, in the research that we do, and in the service we provide to the community."

What's the aim of the committee?

Diversity and equity are two of the core values of our School. We see diversity as part of strengthening our core. Three goals we focus on are increasing the diversity of our faculty, staff and students (and holding on to the people we are able to recruit); making sure diversity is reflected in the courses that we teach; and making sure the school has a climate that welcomes diversity and that all people feel accepted here.

One of our first events was for faculty on how to mentor underrepresented students. It's important to be aware of the background that underrepresented students come from. They typically have more obligations to the family, they might be further away from home, and they tend to have less people who look like them within academia, so they have fewer role models.

How's the School doing with its diversity goals?

I think we're doing really well. We have a long way to go, but I think that our commitment has positioned us to be a real leader on campus. So many faculty, staff and students are deeply committed to these issues. The culture is changing – people are more willing to talk about it. I've already noticed it in the time I've been here. 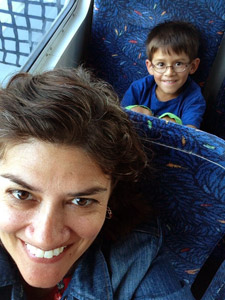 India and her son Teo on a water taxi

Why is diversity important for the School?

We can't achieve excellence without diversity. We need diverse perspectives in the classrooms, in the research that we do, and in the service we provide to the community. The communities we serve are very diverse, and we need the public health workforce to reflect that.

I have a son, Teo, 6. He's a lot of fun. I like to run. I ran cross-country in high school, and picked it up again a few years ago. I've run some half-marathons. I love to cook Mexican food and make desserts and bake. I love music and concerts – everything from alternative and independent to world music.