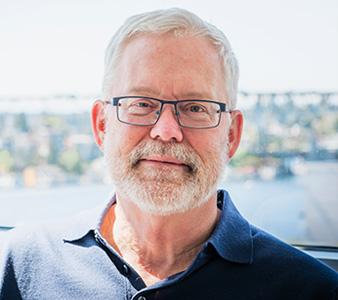 After more than 30 years working on legal issues related to the delivery of health care services, Jeff Sconyers is now using his vast experience and knowledge to make policy and ethics come to life for students at the University of Washington School of Public Health.

“I’m the luckiest guy in the world,” says Sconyers, a senior lecturer in the School’s Department of Health Services. He teaches several courses to graduate students in both the full-time and executive Master of Health Administration (MHA) programs. “Our MHA students are really committed to what they’re doing, they’re engaged and they want to make a difference in the world.” 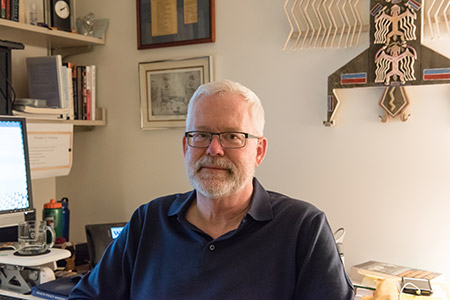 Jeff Sconyers in his office, with a Navajo sand painting cut-out of Big Thunder.

Although doctors and nurses are directly responsible for a patient’s health, Sconyers notes, health administrators play an important role in facilitating decisions about patient care. This is particularly true in situations involving ethical dilemmas, such as genetic testing prior to birth or end-of-life care. How do you balance health care quality and efficiency? How should organs be allocated when they are often in short supply? What should be the goals of health care for people who are dying?

Sconyers’ goal is to equip his students with the knowledge they need to analyze these complex issues, using real-world scenarios to empower students to think critically and creatively.

“Most of these students haven’t been faced with crucial questions of life and death or allocation of scarce resources,” Sconyers says. “What I try to teach them is how to pull on the threads, pull apart this mess and sort it into categories, so they can see what the issues are.”

In his Ethical Issues in Health Services course, Sconyers presents case studies that illustrate ethical challenges that may come up while managing health care services. Students sort through all the facts and apply ethical principles to reach a conclusion.

His students just finished looking at the Ashley Treatment, a controversial set of medical procedures undergone by a child in Seattle who had severe developmental disabilities. The treatment included growth attenuation (limiting a person’s growth in size), hysterectomy and breast bud removal. The goal is for students to determine whether the treatment was medically and ethically appropriate.

Sconyers has used this case more than 10 times and it has never come out the same way twice. Case studies are often drawn from his own personal and professional experiences.

After learning how to think about dilemmas in clinical care, students turn to questions of organizational ethics: What’s the connection between mission, vision and values, and organizational strategic plans? How can health care leaders make ethical business decisions? What’s the role of community desires and needs in affecting institutional decision-making?

Students are reviewing several recent Washington state transactions to critique whether they are consistent with organizational mission and community needs. They are looking at the acquisition of Group Health by Kaiser Permanente, for example, and Multicare’s takeover of Deaconess and Valley Hospitals in Spokane. Students will present their conclusions in a few weeks.

Students in Sconyers’ Health Policy Developmentcourse study how health policy is made and how to affect and influence it. They look at the Affordable Care Act as one example of how health policy comes to be. “You need a burning platform – a problem that people find compelling,” Sconyers says. “Then you need solutions that address the problem and political circumstances that warrant the investment of resources.”

For example, students worked with the Washington State Medical Association to identify guidelines and standards for physicians prescribing opioids for chronic pain. The misuse of opioid medications has become a public health crisis in recent years, and states are taking different approaches. Students researched opioid control practices across the country and assembled recommendations for Washington state. 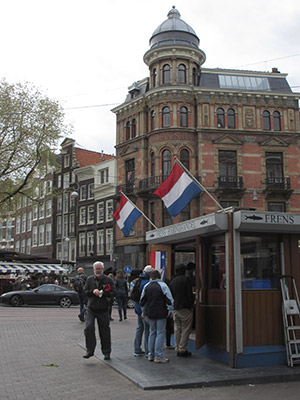 Jeff Sconyers buying a herring sandwich in the Netherlands.

“MHA students are very collegial and collaborative,” Sconyers says. “They’re not afraid to risk being wrong and they’re willing to explore things they might have missed and better ways to tackle problems.”

These are not only traits that Sconyers admires; they are also traits, he says, that were key to his success at Seattle Children’s. He served as the hospital’s general counsel – its first ever – and senior vice president for 21 years.

“I had a job that anybody who’s interested in health law would kill to have,” Sconyers says. “I got to make up this job and nobody knew that I didn’t know what I was doing,” he jokes. He had previously served on the legal team at Providence Health & Services and as regional general counsel for the Franciscan Health System.

Among his many accomplishments at Seattle Children’s, he is most proud of two. First, he worked with Public Health – Seattle & King County to form an emergency preparedness coalition called the Northwest Healthcare Response Network, which brings together public health and health care organizations to plan and train for future region-wide emergencies. Second, he helped build the foundation for what is now a groundbreaking cancer treatment center.

Sconyers worked for more than three years with a team to create the Seattle Cancer Care Alliance, formed by the Fred Hutchinson Cancer Research Center, UW Medicine and Seattle Children’s. He structured a “big book of agreements” that detailed exactly how the corporate entity was supposed to function.

“We built a lot of what if this goes wrong provisions,” Sconyers says. “Lawyers don’t often get a chance to see a physical embodiment of something that they’ve done, so it’s really cool that I can look at that building on I-5 and say, I helped make that happen.”

Sconyers’ career certainly didn’t happen the way he planned. In 1976, he entered a seminary, but three years later, left after realizing that being a minister wasn’t for him. That same year, he walked in to an LSAT exam after little preparation, scored well and got in to Yale Law School. He would eventually pass the bar in three states: Washington, Connecticut and Massachusetts. 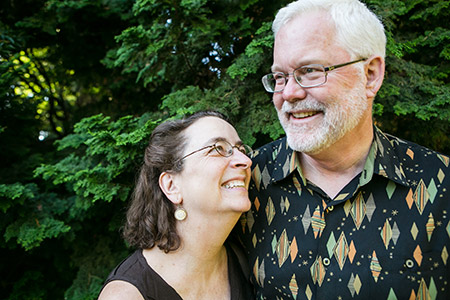 Sconyers cooks up more than just legal agreements; he can also make a mean pot of gumbo. Inspired by his family roots in the Deep South, he prepares an elaborate spread every New Year’s with black-eyed peas, crawfish etouffe, jambalaya and “red beans and rice made with the bone from the Christmas ham,” he says.

His talent in the kitchen is well-known at SPH. He recently received the top two bids at the MHA Student Association silent auction. What did they bid on? A Sconyers-prepared dinner for six. (Plus wine.)

Sconyers also enjoys spending time with his wife, Debra Godfrey, whom he calls his “sweet baboo.” On their first date, the pair went to a Woody Allen double bill; they’ve been together ever since. “That’s 28 years of open warfare,” he jokes.

Watching movies is one of his favorite pastimes, as well as reading. Sconyers has been a history buff since studying the subject as an undergraduate at the College of William and Mary in Virginia. He once wrote a book-length report about intertestamental literature, or “the stuff that didn’t make it into the Bible,” he says. He traced everything that happened from the beginning of the fourth century B.C. through the end of the second century.

“I’m like the Platte River—a mile wide and an inch deep,” Sconyers says. “I know a little bit about a lot of things and nothing much about anything in particular.”

He’s also a collector of Navajo art, with rugs on the floor and walls of his office, as well as depictions of ceremonial sand paintings. He’s been to the monthly Navajo rug auction in Crown Point, New Mexico, four times, and each time leaves with more rugs than he intended to buy. Why the Navajo? Somehow, despite all the pressures of American civilization, the Navajo have managed to preserve their own cultural identity and integrity, Sconyers says. He admires their persistence and adaptability.