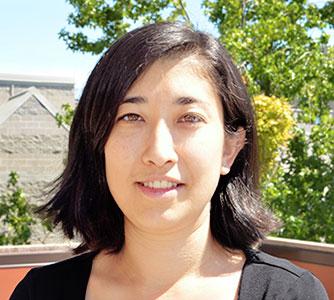 June Spector grew up playing the violin, and noticed many of her musical friends and colleagues suffering from injuries and fine-motor disorders. As a chemistry student, she saw people exposed to hazardous chemicals in the laboratory. "Those two things made me really wonder about how people stay safe and healthy and work, and how the workforce stays healthy," Spector says. Today she works to improve the health of workers in a variety of industries, including the many Latino farmworkers who harvest our fruit and other crops in temperatures close to 100 degrees. Much of her ongoing research centers on heat-related illnesses.

What is a heat-related illness?

It can be anything from minor heat rash to very severe heat stroke that leads to death. When the body gets overwhelmed and can't maintain its normal functioning, the core body temperature can rise, leading to damage to the kidneys and eventually the brain. One late-stage manifestation is confusion.

Why are agricultural workers at risk?

Even people who seem otherwise healthy can be at high risk of heat-related illness if they're doing a lot of physical activity and have to exert themselves. It doesn't just happen because it's hot out or humid. When we move, we generate heat. It turns out that this is really important for people like agricultural workers who perform heavy physical work. Many are migrant workers, aren't English-speaking and may not have the resources to protect themselves from hazards like heat outdoors.

Tell us about your research.

I'm just finishing up a two-year pilot project through the Pacific Northwest Agricultural Safety and Health Center. One of the first goals was to get a better descriptive picture of what's going on with heat-related illnesses in agricultural workers in Washington. We looked at workers' compensation claims over several years. What we see is that workers in agriculture and forestry are at higher risk compared to other industries. There's been a fatality in Washington and many more in California. People who work with fruit and other crops are at particularly high risk. 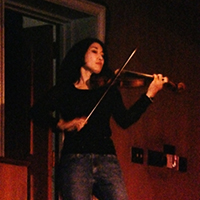 Spector has played the violin since age 5

What role do their beliefs play?

We found some interesting things when we talked to and observed workers. For example, it's recommended to wear light, breathable clothing, but many workers wear dark, layered clothing. There are competing hazards in the fields. People don't want to get scratched by the trees when they're harvesting. They're also worried about UV exposure from sunlight and want to cover up to protect themselves. Also, there was a fair amount of concern for general health, staying fit and obesity prevention. People reported that a benefit of keeping layers on as the day gets hotter is sweating. Some reported that sweating could help them lose weight, which is not a healthy way to lose weight.

There were also some beliefs that cooling down quickly after being warm causes other illnesses or is just generally bad for the body. But cooling is the mainstay treatment when someone develops heat stroke. People need to cool down rapidly: putting cold water and fans on to encourage evaporative heat loss, drinking cool things, and ice baths for people who are really sick.

What will you do with this information?

We've already started adapting our education materials and integrating what we learned into training we offer. We try to give back to the participants. Under Washington's Heat Rule, employers are required to provide training on heat-related illness, and we hope to improve the training materials that are out there. The Heat Rule also says employers are supposed to provide water and have a plan for what to do if people get sick.

Probably not. A lot of workers are paid by the amount of harvesting they do, so they may be reluctant to take breaks. The type of water available can also be an issue. If it's perceived as contaminated or doesn't taste good, people tend not to want to drink it. Exposure to heat and dehydration can affect how you function and can lead to having an accident. Ladder injuries are a big problem in agriculture. In the future, I hope to look further into these issues. 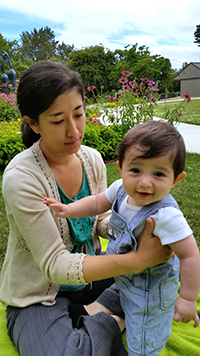 Have you monitored any of the workers?

Yes. We observed and monitored 18 crop workers who swallowed a small pill-sized device that measured their core body temperature. Their heart rate and other parameters were also measured. We're currently analyzing the data, but it appears some of the workers, particularly those who are not removing clothing layers as the day gets hotter, have levels of exposures above recommended standards, and their bodies are showing signs of heat strain.

Are employers aware of the risks?

Will climate change make heat-related illness an even greater risk?

We know there will be changes in the mean temperatures and variability in the climate over time. Changes in ecosystems, crops and pests may have implications on the workforce. It's hard to predict. In tropical and subtropical areas, the risk for heat stress is already high, and it's only projected to increase. It's going to become a bigger and bigger issue.

What other kinds of research are you doing?

I've been working with people in Computer Science and Engineering and Math on remote sensing of workers using cameras like the Microsoft Kinect. We're testing those in manufacturing workplace settings to try and get a sense for what workers are doing that might be hazardous to their muscles and that might cause injury. You can track the motion, how repetitive it is, what the posture is over time.

I'm also working on projects to prevent people who do get injured at work from becoming disabled. Although we'd like to prevent things from happening, there are still injuries and illnesses that happen, and we want to be able to take care of those people and help them get back to their usual state of health.

How did you get interested in occupational health and the environment?

I was very interested in music growing up. I've played the violin since I was five. A lot of my friends and colleagues developed injuries and had lots of struggles. Remarkably enough, I never got injured. A particularly difficult problem is called focal dystonia. It's not necessarily a painful disorder, but tends to manifest more with fine motor dysfunction. There are involuntary movements like writer's cramp, and it affects performance. There are also a host of psychological ramifications when people can't do the thing they love to do. So I became interested in the health of artists and musicians.

Also in college I was a chemistry major and did a lot of work in labs. I realized I was more interested in the exposures people were having in the laboratory setting than the actual lab work (laughs). It was a combination of those two things that made me really wonder about how people stay safe and healthy and work, and how the workforce stays healthy.

Do you still play violin?

It's been a little on-and-off since the beginning of medical training. Currently I'm involved in Orchestra Seattle and the Seattle Chamber Singers. I've been playing with them for about two years. I wish I could practice more. It's been a little challenging since having a baby. Once he (Reuben) goes to bed, we put our practice mutes on. It works, but it's a little bit crazy. My husband, Max Lieblich, plays the cello. That's actually how we met, but that's another story.