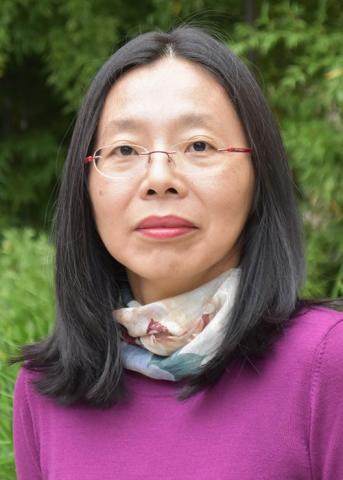 Lurdes Inoue's grandparents left Japan to seek a better life in Brazil. She grew up with a mix of cultures, and pursued an early love of math. Now she uses her skills to answer pressing questions about some of the world's most common cancers.

What was it like growing up in Brazil as 'Sansei' – a third-generation Japanese?

I was born and raised in Sao Paulo, the largest city. It's a melting pot. It has the largest population of Japanese outside of Japan, but there weren't a whole lot of Japanese in my neighborhood. For holidays, my family would get together and we'd have Japanese food. I didn't really learn Japanese except for a few words. That's one of the things I kind of regret. 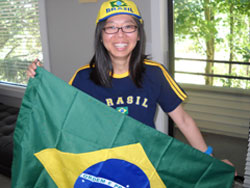 Lurdes Inoue is a big fan of Brazil's soccer team.

Why did so many Japanese migrate to Brazil?

It was mostly because of bad economic times in the 1930s. Some of my relatives went to work on farms. Others went to cities. It was hard for them. They didn't know the language.

What turned you on to statistics?

I always liked the quantitative sciences, and math was one of my favorite courses. After my first year at university, I chose statistics. It was perfect. I like theory, but I also like to see how statistics can be applied to solve real problems.

What brought you to the US?

I got a fellowship from the Brazilian government and was accepted to the PhD program in statistics at Duke.

How did you come to the UW?

I was doing postdoctoral research at the MD Anderson Cancer Center at the University of Texas but I really missed having contact with students. I applied to several schools. I received an offer here and joined the faculty in 2002.

How do you explain what you do to your relatives?

One of the examples I like to give: Suppose you take a screening test, maybe a mammogram or a PSA (prostate-specific antigen). Even before finding the results of the test, you can ask: Do you have the disease you've been tested for? You don't know. With Bayesian inference (based on the theories of 18th-century mathematician Thomas Bayes), we express this uncertainty with (prior) probabilities. These probabilities summarize any other relevant information you may have, such as whether you have a family history of the disease. Now, suppose you test positive. Do you have the disease? There is still uncertainty since the test is not perfect. We can then update the probability that you have the disease given the positive test, using Bayes' rule. Similarly if you test negative. We can do these calculations for an individual or for an entire population.

Can you give us an example for an entire population?

You might want to know when you should start screening for a disease and how often. We can devise models for the disease progression. These models allow us to study the impact of different screening strategies and provide guidelines to clinicians. Most of my work is about modeling the disease process, the natural history of the diseases, under the Bayesian framework. My primary application has been on prostate cancer – the second leading cause of cancer death among men in the US.

What have you learned about prostate cancer?

It's kind of a puzzle. Through a consortium, the Cancer Intervention and Surveillance Modeling Network, we are trying to explain the dramatic changes in incidence and mortality of prostate cancer. We don't have one set of data that can explain everything that is going on. What we try to do is put all these pieces together in a coherent way. Our models indicate that the drop in mortality may be explained by a combination of treatment and screening. 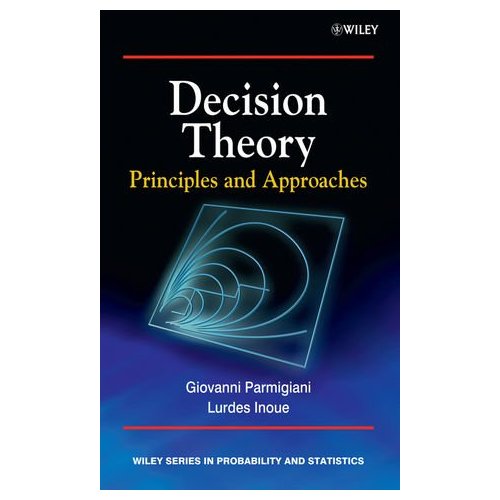 Several recent studies have said men don't need to be tested as often. What do you think?

It's not an easy question: not all cancers need to be detected early because some men (the low-risk cases) would not die of the disease, while others (the high-risk cases) would benefit from being treated earlier. So, one rule doesn't fit all. Modeling would be the most informative way to provide guidelines about appropriate screening and treatment strategies.

You're chair of the school's curriculum committee. What's that been like, and why is it important?

It has been a really great experience. I am a shy person and so I had to overcome my own shyness. It's also exciting and a bit stressful. One of the biggest tasks this year has been the review of the learning objectives in all of our degree programs for the school's re-accreditation. The accreditation is important because it provides the recognition by our peers that our programs meet national standards and that we do a great job here.

What have you accomplished?

We've just finished a big draft for all programs and departments. There've been a few changes in the learning objectives and recognition of a few areas we'd like to improve. MPH students, for example, used to have more of a clinical background. Now they have a more heterogeneous background. We're thinking of building new courses that would provide more of the biological background to them.

What are you most proud of?

My work with students. Two of my former PhD students, Rebecca Hubbard and Donatello Telesca, had their dissertation work recognized by the statistics community with prestigious awards. 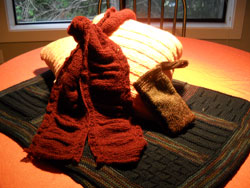 I like traveling. I also like knitting. It takes my mind off of things. I knit sweaters sometimes, but mostly small things, like pillow covers. When I start something, I kind of have a competition with myself to finish up quickly. I get obsessed.

How often do you return home?

I try to go back once a year to see my family. I like to go at Christmas, when it's summer in Brazil. I'd like to be out there for the World Cup in 2014. Brazilians are big fans of the national football (soccer) team. We go crazy. The city stops. You can't be a Brazilian if you're not a football fan!

I try to read Brazilian authors, like Paulo Coelho. "The Alchemist" was my favorite. Another author I really like is Jane Austen.

What's next for you?