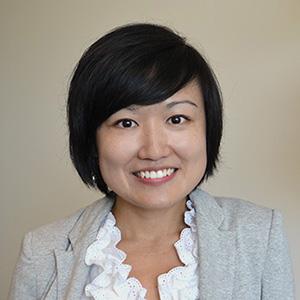 The world is getting fatter, and – despite progress in many countries – more people than ever are smoking. Marie Ng of the Institute of Health Metrics and Evaluation (IHME) led efforts to gather the evidence for these findings.

What was your major finding on obesity?

Nearly a third of the world's population is obese or overweight, and a majority reside in developing countries. It's something we can't ignore. It leads to lot of chronic conditions, like diabetes, some cancers, and cardiovascular disease. We're also seeing the onset of obesity at younger ages. Some countries, such as India, still face under-nutrition, so we see a double burden.

What accounts for this shift?

In general, theories suggest changes in our food intake play the biggest role. In certain countries, more fast food is available. Obesity is really complex. It involves eating habits, physical activity and lifestyle, genetics, and the environment. For example, in China people in metropolitan areas don't exercise as much as before because motor vehicles have replaced biking and pollution deterred people from engaging in activities outdoors. People avoid walking if there are no paved pedestrian areas. Urbanization pushes out parks and green areas. There are a lot intertwined components.

How do you hope your findings will be used?

Our study provided the empirical evidence, which highlighted the severity of the obesity epidemic worldwide. The numbers we show paint a fairly grim picture and underscore the urgency of taking action. As countries step up their effort to combat this epidemic, we need to continue to monitor the trends and benchmark progress.

What surprised you most about smoking?

Actually, it's a fairly encouraging story. The rate has gone down over the last 33 years (from 41.2 percent to 31.1 percent in men and from 10.6 percent to 6.2 percent for women). However, because of population growth, the number of smokers has gone up (from 721 million to 967 million). So has consumption, measured by the number of cigarettes smoked. Some countries are very worrying, like Russia and China, where there's high prevalence and high consumption. The burden is still fairly severe.

What is the outlook for China, where cigarette-giving has been part of the culture?

There might be some improvement in awareness, but there are other battles. Tobacco companies are state-owned, so the incentive for controlling consumption could be challenging. Smoking is so prevalent that it is considered a norm.

How challenging was it to come up with these estimates?

It turns out prevalence and consumption are not that well monitored. Out of 188 countries, some have no data. Others monitor periodically. From a global health perspective, we're dealing with a smoking epidemic, and we want the latest information to inform policy. This is where statistical tools come into play. We tried to infer and estimate data from countries with similar social economic development and similar consumption patterns. Gathering and collating data is a gigantic team effort. As just one example, post-bachelor fellows and data analysts dug into thousands of data sources to extract information on smoking frequency and types. This is not a trivial task because questions on smoking frequency and types differ across surveys. We had to read through each survey carefully to understand how indicators were defined, not to mention that many national surveys were only available in local languages. Altogether, we were able to obtain 38,000 data points for the smoking study. 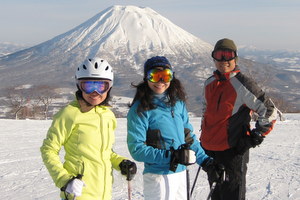 Skiing with sister and brother-in-law in Niseko, Japan

Are these studies part of the Global Burden of Disease 2013 Study?

Yes, starting this year we'll update it annually to give the timeliest information to policy makers. The Global Burden of Disease Study was the largest study to systematically quantify the estimated health burden of mortality and morbidity for a wide range of diseases. It saw a shift in burden from infectious to chronic diseases. More than 290 diseases and 67 risk factors were studied by more than 1,000 collaborators. It was exciting to be part of it.

You were a psychology major. What drew you to global health?

Originally, I thought I'd be a counselor or therapist. I majored in psychology at the UW but minored in philosophy and mathematics. Then I realized there's so much uncertainty in the research. Doing good statistics is so important for getting accurate results. In graduate school, I focused more on mathematical statistics, but I really wanted to do something that had more social and global impact.

"A GOOD STATISTICIAN TAKES JOY IN PLAYING IN OTHERS' BACKYARDS"

How did you end up at IHME?

I read a Columns magazine piece as I was finishing my PhD at USC and read about the startup of this institute. I thought, maybe I'll give it a shot for my post-doc. I ended up evaluating the India AIDS Initiative, funded by the Bill & Melinda Gates Foundation.

What makes a good statistician?

An eagerness (and openness) to interact with people from different backgrounds and disciplines. To paraphrase one of the statistical giants, John Tukey, a good statistician takes joy in playing in others' backyards.

What's next in your work?

Another part of my work focuses on evaluating health programs, whether intervention or prevention. One of my current projects, with Emmanuela Gakidou and funded by Medtronic, is to assess programs that deal with non-communicable diseases (NCD), such as hypertension and diabetes. It will be in India, Brazil, South Africa and the U.S. This is a very exciting project because from a methodological standpoint, it provides a rare opportunity to design and conduct a prospective evaluation. From a health policy standpoint, NCD is a rising disease burden in many developing countries. Being able to identify effective intervention strategies could have profound global health implications.

I visited when I was in middle school. It was summer. Who would not be drawn to Seattle in the summer? It was gorgeous. Hong Kong has so many buildings, I'd never seen the horizon. I was just lucky when I was at UW. I was fortunate enough to be valedictorian and was the president's medalist my graduating year. I attribute that to the fact I was able to encounter many great mentors. 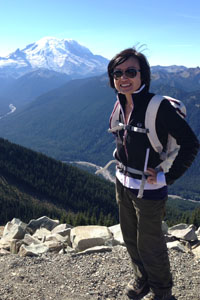 Do you also mentor?

I formally mentor five post-bachelor fellows. It's a really interesting experience. One challenging aspect of being a faculty mentor is not just about teaching someone how to do certain things, but knowing that person, their communication style, their work style, their personality, and expanding your own capacity to adapt to different people to be a good mentor. It's a continuous learning process.

I started piano when I was five, and the violin when I was about seven. I'm not particularly musical, but I played violin in the UW Orchestra. One thing my parents did very well was to help discipline me. My parents were furious in terms of making me practice. With music, you have to follow some rules. Everyone said if you play classical music, you are better at math, or you'll be smarter in some way (laughs). Personally, I like sports more.

I used to like swimming. Here I go biking and skiing.