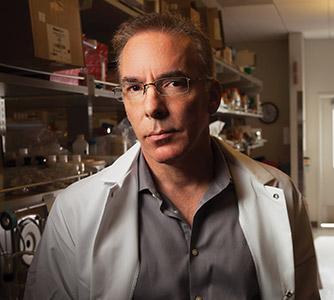 Michael Gale Jr. will never forget the sound his ‘68 Mustang made when its engine roared back to life in 1993. The car was given to him in 1977 by his father. When it was finally ready for the road, he had it painted its original Highland Green color, channeling Steve McQueen in Bullitt.

A UW School of Public Health graduate student at the time, pursuing a PhD in pathobiology, Gale spent a half hour every night for a year pulling the engine apart and probing its pieces for rust or damage. He was a tinkerer who loved tweaking the components or installing new ones to see what would work. 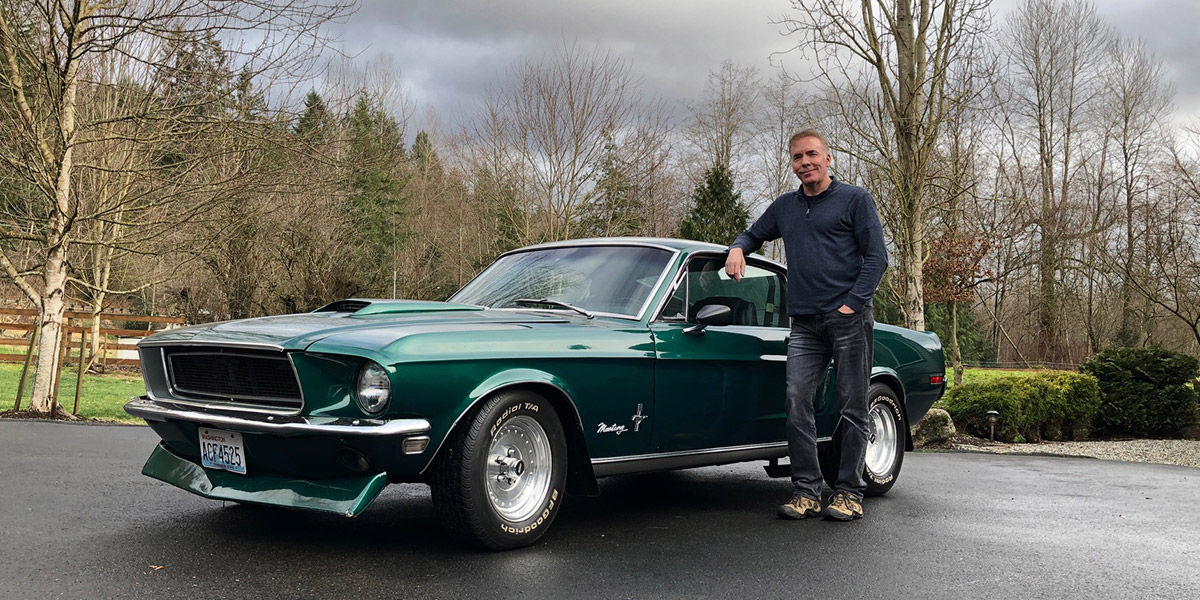 Gale takes a similar approach in the lab, where he has spent the last two decades investigating the inner workings of viruses and cells — learning how viruses trigger the immune response and how the cell works to fight back against viruses. His research has helped to define the innate immune response as well as strategies to control viral infection.

“The body, all the way down to our cells, is a lot like a machine,” said Gale, who was drawn to pathobiology because he “wanted to understand the mechanisms of infectious disease and the processes that happen inside a human body.”

When a virus infects a person, it sets off a remarkable defense called an immune response. This response includes innate immunity, considered the first line of defense because it’s activated immediately upon virus infection. Many innate immune components are already present even before infection begins. During this response, a protein called interferon is released by the virus-infected cell, alerting nearby cells to fight off the virus. Over time, however, viruses have evolved to dodge or snuff out this alert system in order to survive and spread.

“They’re evolving much faster than we can work to find solutions,” said Gale, who believes that pathogens can be controlled only after understanding how they interact with the human body, thus allowing researchers to identify important therapeutic targets and vaccines for controlling infection.

As a UW postdoctoral fellow in the late ‘90s, Gale mapped out the processes and identified the mechanisms by which the hepatitis C virus resisted interferon. He looked at a particular gene in the body that he knew was turned on by virus infection and interferon, and he saw that the gene, a protein kinase, was being shut down by the hepatitis C virus — allowing the virus to replicate. (Protein kinases modify other molecules by chemically adding phosphate groups to them. They are known to regulate the majority of cellular pathways.)

To find the molecule responsible, Gale broke up the viral genome into its different genetic modules and re-introduced each by itself into the cells. This three-year study is one of the highest cited papers in the journal Virology. 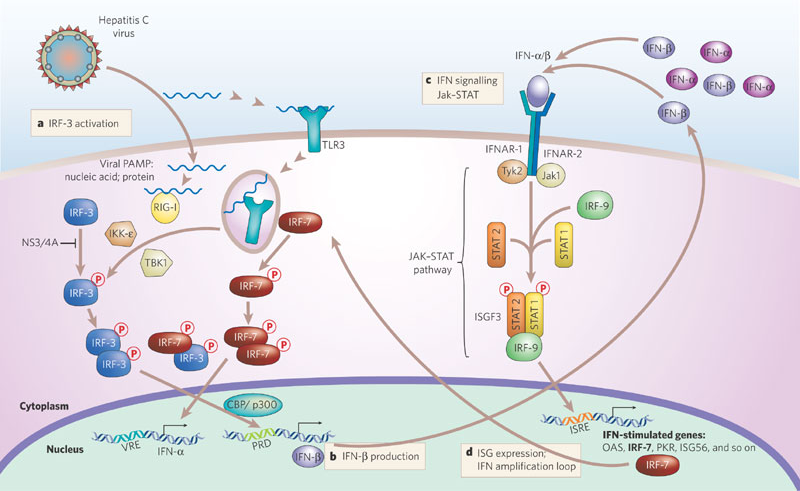 Later, in the early '00s, Gale led a team (at the University of Texas Southwestern Medical Center in Dallas) that defined the role of retinoic acid inducible gene I, also known as RIG-I. They revealed that RIG-I was an alarm system that went off when foreign ribonucleic acid (RNA) viruses — such as hepatitis C, the flu, Zika and West Nile — infected the human body, thus triggering the immune response against infection. The team found that RIG-I turned on the immune response to hepatitis C by sensing viral RNA in the infected cell, and they showed that specific antiviral drugs could function to enhance the RIG-I pathway and innate immunity in cells to shut down infection. Findings from this research helped inform the development of drugs that target the hepatitis C virus proteins. Most patients infected with hepatitis C virus can now be cured.

“I have friends who were exposed to hepatitis C and were cured with the therapy that was made possible by contributions from the many hepatitis C research labs, including work that we did to reveal the mechanisms of innate immunity against hepatitis C,” Gale said. “It really hit home for me early on in my career how important this work is.”

Gale is the founder and director of the UW School of Medicine’s Center for Innate Immunity and Immune Disease (CIIID), which has grown to include over 60 scientists. He is co-director of the Center for Emerging Infectious Disease and an affiliate member of the Fred Hutchinson Cancer Research Center. He is also a UW professor of immunology and he holds adjunct appointments in Microbiology and Global Health. Gale was recently named SPH’s 2019 Distinguished Alumnus – the School’s highest honor, which recognizes distinguished service and achievement in public health. He will be honored at a future event, where he will share highlights from his career in a lecture.

“So much about who you are as a scientist is influenced by those days getting your PhD,” said Gale, a ’94 doctoral graduate of SPH’s former Department of Pathobiology, now a program in the Department of Global Health. It was through this program that Gale met his mentor, Dr. Marilyn Parsons, who inspired his interest in innate immunity.

Parsons, a scientist at the Seattle Children’s Research Institute Center for Infectious Disease (formerly Seattle Biomed) and a UW affiliate professor of Global Health, uses molecular tools to understand how parasites invade, modify and survive within their human hosts. Gale’s project focused on the parasite Trypanosoma brucei, an organism transmitted by the tsetse fly that, when bitten, forces people in sub-Saharan Africa into a coma. Gale identified the protein kinase that was driving the parasite’s lifecycle, allowing it to transition from the fly to the human to cause disease, named African sleeping sickness. Targeting this protein kinase with drugs could one day lead to a potential cure for the infection, according to Gale.

“I wish I had been exposed to science earlier. I watch 14 year olds working in our labs talking about CRISPR technology and genomes. When I was their age, I was just talking about cars and Star Trek.”

Gale aspires to provide similar transformational training opportunities to his own mentees. He has trained dozens of doctoral students and post-doctoral fellows and is known for his individualized attention. He says, “My philosophy with the students is to give them the tools, guidance and space they need to be successful, real-life scientists on their own.”

He is also passionate about exposing younger students to biomedical research. The CIIID does outreach to local high schools and middle schools, where postdocs spend time teaching infectious disease immunology. Students visit the lab for a day to do small experiments alongside scientists. The center also hires paid summer interns.

Gale’s own children have chosen to pursue careers outside of science. His son, Joseph, is an autism therapist; oldest daughter, Kelsey, is a software developer; and youngest daughter, Tenille, is a nurse. His wife, Cynthia, is a special education teacher in Issaquah, where they live. 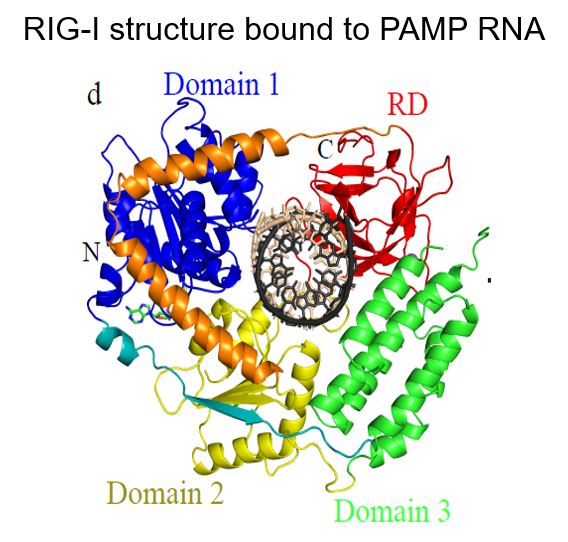 Since the discovery of RIG-I’s role as a major pathogen recognition receptor, scientists around the world have coalesced around a new field focusing on RIG-I. Gale and his team are currently working to understand the Zika virus, which "shuts down the whole interferon pathway better than any virus I have ever seen – 100 times better than hepatitis C,” Gale said. It turns out the virus loves to replicate in the neural cells in the fetus, shutting down a particular pathway that then prevents the baby’s brain from developing and shaping properly. Gale hopes to finish identifying the processes by which Zika impacts the development of neuronal cells. This could lead to drugs that protect against fetal infection by Zika virus and prevent microcephaly.

More recently, Gale’s team and others in the field have revealed a cancer therapeutic role for RIG-I, and have been working with drug companies on a potential cure for some cancers, including melanoma and liver cancer. The idea is to deliver small molecules to the cancerous tumor, where they will bind to and activate RIG-I, jump starting the innate immune system and shrinking the cancer.

Additionally, Gale is part of a research group that is close to defining a process of vaccine protection against HIV. There are a handful of HIV vaccines that have proven to be effective in monkeys, according to Gale. The team is looking forward to beginning clinical trials in humans soon.