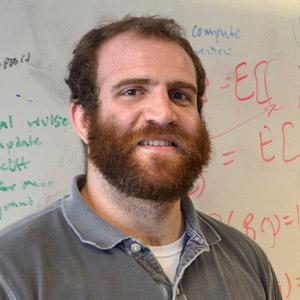 Noah Simon is developing open-source software that could help other scientists better understand diseases. Ultimately, that could lead to more targeted therapies and better personalized medicine.

How are you using big data?

A lot of my projects are directed broadly at this idea of personalized medicine. Personalized medicine means assaying lots of genetic and genomic features and trying to use in treatment decisions. We've come to realize that diseases we previously thought were very uniform are actually very diverse collections.

Noah Simon on the promise and challenge of big data

Take Crohn's disease, for example. It's inflammation of the bowel. We used to think once we found the golden bullet, we could figure out how to stop the immune system from attacking itself. It increasingly looks like that's not really the case.

Same for rheumatoid arthritis. Turns out there are many ways for the immune system to go haywire. A lot of these cause joint inflammation and get called rheumatoid arthritis, but at a deeper biological level they look different. In terms of treating the disease, that’s super important. We have so much data to help discover these biological differences sometimes it’s hard to figure out which data are actually informative about the disease.

A lot of my work in varying areas goes into attacking that problem – coming up with statistical methods that let us look at a collection of data and build a model that says which treatments will be effective for certain people.

What drew you to Crohn's disease for your research?

Inflammatory bowel diseases are a big open area where a lot of good work could be done. They're chronic diseases people get when they're young and can be pretty debilitating. I know a fair number of people with autoimmune diseases. It runs in my family, too.

We have some good treatments that work for some people but not for others. So it seems like a really tractable way to improve the lives of a lot of people.

President Obama recently touted the promise of personalized medicine. How far have we come and how far do we have to go?

I think modern medicine is incredible, but we're not there yet. We have had 10 successes, maybe 20. In some ways that's a lot, but it's a drop in the bucket. We need to be able to measure things more accurately. The fact we can even think about doing this is sort of science fiction.

Are you doing any research on cancer?

We have been looking into it, but not doing much. I'm very interested in learning about epigenetics. That's the new exciting thing. I’m really hoping to build some collaborations around this; looking around the university (though not as actively as I would like) for potential collaborators exploring genetic and epigenetic causes and characterizations of cancer.

It's the Statistical Learning Applied to Biostatistics Lab. It's a virtual lab. I like the term because it makes me feel like a scientist. We have a group – me, Daniela Witten, Ali Shojaie, and 10 or 15 graduate students. We meet once a week to discuss current research. 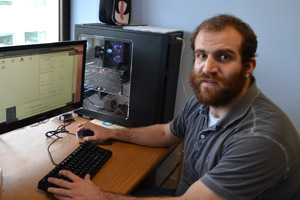 So your work is mostly …

Here in front of the computer (smiles). Programming, helping students program. There are multiple parts to the methods research. You work on the data, you try to come up with questions people want to answer, come up with methods that answers those questions, and then work to implement them, to develop software.

The idea at the end is to package very open-source software that pharmaceutical companies and academic institutions can then use to find the biomarkers. That's the way a lot of times you can have the most impact.

Where do you get your data?

What attracted you to this field?

I loved math, and wanted to do statistics because it was a little less esoteric. But a year or two into my studies, it didn't seem all that useful. In biostatistics, there were these really cool problems.

I knew I wanted to go in the direction of disease biology and to try to help develop methods to better characterize diseases. The point of characterizing them is to cure them. Being able to do that through math is fantastic, and I feel extremely lucky to get funded to play around with numbers and give back at the same time.

"Now we can treat diseases that we couldn't even characterize 30 years ago."

Several reasons. The least scientific is that I love the West Coast and I think people are laid back and less competitive. I'm from a suburb of Washington, D.C., in Maryland. Around here, people feel, 'If you're successful, that helps me be successful.'

When I interviewed at the UW, I felt like real science was being done here. You wander through the halls and see these great labs. Also, the UW has a world-class biostatistics department.

What was your reaction to being named to Forbes magazine's 30 Under 30 list of top young scientists?

I think it's great that Forbes is recognizing science and people who make scientific contributions. The honest truth is it's a lot to live up to. I like to think I'm trying to work on important problems, but I think there are a lot of really smart people and people working hard and doing great stuff.

What do you do for fun outside of work?

I do wrestling and Brazilian jiu-jitsu. Not cage-fighting, but like high school wrestling or Greco-Roman.

My partner, Julia Daniels, is a PhD student in the School of Education. She was a high school teacher in East Oakland, CA, for a while. We share an interest in the education system in the U.S. and under served students.