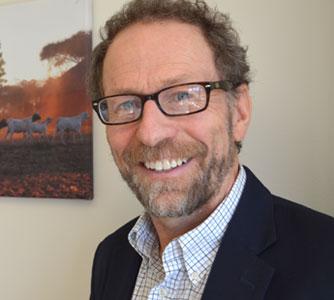 Peter Rabinowitz grew up loving wildlife and nature. Today he fuses his passion for animals, the environment and human health in a unique project that looks at the health risks we share from interacting in an increasingly crowded world.

When I was 8, I took a trip across the country with my family and cataloged the birds, plants and animals I saw. I had a third-grade biology teacher who really inspired me, and I wanted to be an ornithologist or field biologist. As a teenager, I got a falconry license in Washington state and spent summers rehabilitating animals at a wildlife sanctuary. For a high-school project, I surveyed rattlesnake dens in the eastern Cascades. I took a semester off in college to work as a zookeeper in Australia, and did another stint as a cowboy on a ranch in Texas.

How did you land in public health?

I wanted to put my interest in animals and the environment together with my interest in people. During my family medicine training in California, I saw how my farm worker patients were affected by exposures to pesticides and other environmental hazards, and realized I needed to play some role in improving environmental health. I went back to school to get a masters in Public Health and did a fellowship at Yale in Occupational and Environmental Medicine. As I studied how the environment can affect health, I became interested in the effects of environmental change on wildlife and domestic animals, and how such animals, like the "canary in the coal mine," could teach so much about hazards in the environment.

What can we learn from animals? 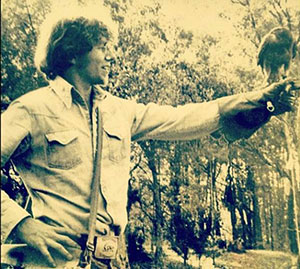 They tend to have greater exposures to particular environments than humans, and may be both more susceptible and, because of shorter lifespans, quicker to show the effects of exposure to a hazard. For example, a dog exposed to asbestos develops cancer 20-30 years sooner than a human. At the same time, humans can sometimes be sentinels for disease risk in animals - it works both ways. Human health professionals and veterinarians have a lot to learn from each other.

Are we seeing more outbreaks of disease between animals and humans?

About 70 percent of the emerging infectious diseases over the last few decades have come from animal sources. SARS, bird flu, Nipah virus in Malaysia, and West Nile virus are examples. Certainly, diseases between animals and humans are not new. There were cattle plagues in the Bible, and at least ever since we became an agricultural society living closely with domestic animals, we've been sharing diseases with animals.

Why are these outbreaks increasing?

Because of changing ecology, changing climate and changing ways we raise animals. Habitat destruction, for example, brings us into closer contact with animals hosting these viruses. Agricultural intensification is a major driver. Per capita, we're eating more meat as the global standard of living goes up. In 1960, there were about the same number of people as chickens on the earth. Since then, the number of chickens in the world has quadrupled to more than 20 billion while the number of people has only doubled. This has required raising food animals in more crowded environments, which amplifies the risk of certain infectious diseases such as influenza.

The more than one billion people worldwide who work closely with animals, both in small farms and large farm settings, are on the front lines of the human animal interface, yet public health efforts often neglect such workers. The Human-Animal Medicine project plans to have a particular focus on the health of animal workers.

What is the 'One Health' concept?

One Health is the idea that since human, animal, and environmental health are so interrelated, we need to break down the traditional siloes between animal health and human health. Human health has often taken an "us" versus "them" approach to animals – viewing them as carriers of diseases or allergens or as sources of bites and injuries, and taken steps to separate people from animals. But as the global environment changes rapidly, animals share many environmental risks with us, and we need to find ways to coexist. One Health is about what we can learn from those shared risks, and it's about protecting the environment in order to optimize the health of the animals as well as humans.

Why did you move the Human-Animal Medicine Project from Yale to the UW last year?

I went to med school at the UW and my parents are here. It's a good time to be here for family. I gave a lecture two years ago at UW about this One Health idea, and found that people were interested, even if few at the time were familiar with the concept. The Pacific Northwest is a natural fit for the One Health concept.

What are the goals of your project?

There are a number of One Health challenges we want to address. First, how are we going to raise animal protein to feed a growing world population in a way that is healthy for humans and animals and doesn't trash the environment? Second, how are we going to interact with wildlife in a way that keeps diseases from moving back and forth between wildlife populations and domestic animals and humans? Third, what are healthy ways to cohabit with animals -- both in households with companion animals such as dogs and cats as well as with other animals in the city, including urban chickens? 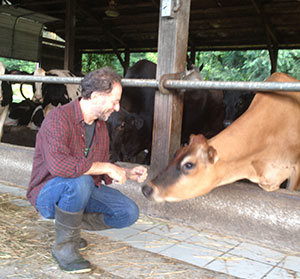 Rabinowitz is researching how to reduce infections on dairy farms

Salmonella is a concern with backyard chickens, isn't it?

We're actually doing a study on that – it is one of several infections that poultry can carry. Chicks may be especially risky, but eggs can also be affected. Many people are not aware of this risk, and we are planning to do sampling of backyard poultry flocks in Seattle to get a better handle on the magnitude of the risk and how to best manage it. There's also a question of how urban chickens can affect the urban rat population. Rats love chicken feed. So this is an example of figuring out how to raise backyard poultry in the healthiest way.

You're doing some research on fracking. What have you learned so far?

We're continuing work on a project in southwest Pennsylvania that is assessing the impact of fracking on the health of both animals and humans living near natural gas wells. Early results show more respiratory and skin complaints among people living in households near dense drilling activities.

What other projects are you doing?

We are about to start pilot work with dairy farms in Washington state on how to reduce risks of infections in dairy productions in order to keep both the workers and the cows healthy. We're finding some incredibly sophisticated, knowledgeable and innovative dairy farmers in Washington and the project is already an incredible learning experience.

You're planning a 'Zoobiquity' conference. What is it about?

The fourth annual Zoobiquity conference, a national day-long meeting of human and animal health professionals, will be held in Seattle in November, sponsored by the UW Schools of Medicine and Public Health, in cooperation with Washington State University and the Woodland Park Zoo. The focus of the Seattle Zoobiquity conference will be on how changing environments affect both human and animal health.