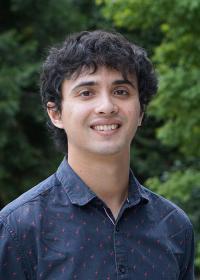 What influenced your decision to pursue a graduate degree in biostatistics?

As an undergraduate, I was fascinated by math. But as much as I enjoyed it, I realized that pure math academia wasn't a good fit for me. After graduating, I worked at the University of California-San Francisco (UCSF) on a Global Health Sciences project related to maternal and neonatal health in East Africa. This was my first exposure to public health as a field, and I was instantly captivated.

It was through my UCSF colleagues that I first heard about biostatistics. After spending time online and chatting with folks, I decided that biostatistics was the perfect way to combine my passion for math with my burgeoning interest in public health.

You served with the Peace Corps in Tanzania. What influenced you  to join?

I felt as though I had stagnated as a person and wanted to do something that would push me out of my comfort zone and force me to grow.

I was drawn to the Peace Corps' simultaneous emphasis on technical work and community engagement. I liked the idea of contributing something, getting to know community members and helping with projects that mattered to them.

I ended up working as a math and physics teacher in the Simiyu region of Tanzania. Outside of teaching, I was able to get involved with HIV/AIDS and sexual health education efforts among other projects.

What did you take away from your Peace Corps experience?

I think anytime you meet people from backgrounds unlike your own, live in new places and cultures, and learn new languages, your perspectives and views will necessarily change. I would like to think that my views on cultural relativism, socioeconomic issues, and neocolonialism are more nuanced and informed than they were a few years ago.

Being a teacher helped me realize that I love teaching and mentoring others, and I hope that I can continue doing this in some fashion after my studies. Working as a cog in the international aid machine has made me more skeptical (in a good way, I hope) about how we think about and provide aid to other countries.

Doing grassroots community work as a volunteer has given me the confidence to get more involved with communities in the U.S. and in various capacities in our department. Above all, I am thankful for the friendships and relationships I developed while living in Tanzania, especially with my students and neighbors, some of whom are among my closest friends to this day. As for my future plans, working in Tanzania strengthened my resolve to return to public health, especially with the goal of reducing public health inequities.

In theory, I think that biostatistics provides an objective way to identify inequities and plan and evaluate interventions. Rather than making decisions based on our opinions and biases, which will likely introduce prejudices and thus exacerbate inequities based on our preconceived notions, we can use numbers to make those processes as fact-based as possible. In practice, of course, the way we design studies and collect and analyze data can be inherently prejudiced, and so we must be vigilant and self-critical throughout every step of our work as well.

Why did you choose to attend UW?

While learning about different biostatistics departments online, I saw that UW's department was among the most mathematically deep and rigorous. That was reassuring to me because while I had a decent undergraduate background in math, I had virtually no training in statistics.

I felt that UW Biostatistics would be a good fit for someone with my background, in that my math experience would be valued while I would be given time to gain familiarity with statistics and more applied aspects of the field.

UW Biostatistics seemed to be the best of both worlds for me in that I would continue working in public health and would get to learn the biostatistics skills I was lacking while not having to give up on my interest in math. I also had very positive interactions with the faculty members and a student I communicated with (shoutout to Avi Kenny!) during the application process.

What are you currently working on?

With Associate Professor Marco Carone, I am working on problems related to causal inference in settings where the exposure is continuous. Oftentimes, when doing studies, we are interested in inferring some kind of causal relationship between an exposure and an outcome of interest. For example, we might be interested in how exposure to certain air pollutants affects incidence of lung cancer in a population.

When the exposure is discrete (a finite number of values), we can do this quite well. It is harder to do when the exposure is continuous, but in the past few years, researchers (including some of Dr. Carone's previous students) have developed tools that allow us to nonparametrically estimate such causal relationships in the context of continuous exposure under shape constraints on the causal relationship (e.g. monotonicity).

This project was inspired by air pollution studies, but we hope that it will be applicable in more general settings as well, given that measurement error is ubiquitous throughout science. I have also been doing an independent study with Associate Professor Noah Simon about high-dimensional statistics, and hope to start working in this field as well.

Have your goals changed since you started your PhD, and where do you see yourself after graduating from the program?

I came into graduate school with a very open mind about my future. I knew broadly that I liked math, research, teaching, and mentoring, and that I wanted to do some combination of those while working in public health.

I hope to collaborate with a diverse group of people in the next few years to gain exposure to as many areas of public health as possible to help inform my career aspirations. I am confident that the skills I am building in the program will prepare me for a variety of careers.

What is your favorite thing about being a UW Biostat student?

The faculty and staff with whom I regularly interact are extraordinarily supportive and empathetic, which has made a tremendous difference for me, especially given the pandemic and most of my education being virtual thus far. Prior to starting graduate school, I was worried that I would struggle to find mentors who care about me as a person. I have also really enjoyed being in Seattle and spending time with friends exploring the area.

What advice would you give to a student who is considering a UW Biostatistics program?

If at all possible, try to visit the departments you are considering and talk to current students, faculty, and staff, while keeping in mind that nobody will give you completely impartial advice. I think that this is the best way to gauge the culture of a department, and given that you are preparing to spend at least a couple years of your life existing in the department, getting an accurate sense for how you would feel being in that department is very important. Although it worked out for me and I'm happy with where I ended up, I probably should have done a more thorough job of this while deciding where I wanted to go to school.