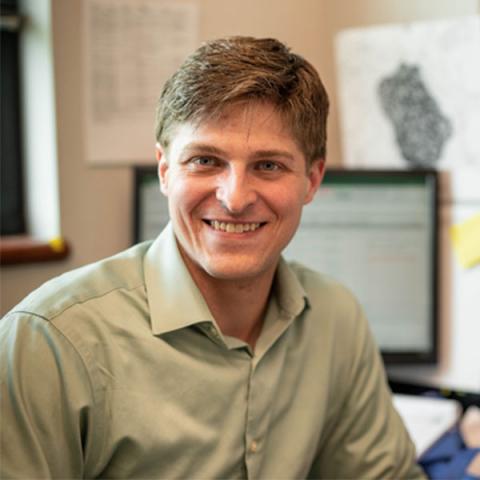 For Joe Dempsey, summers in Fort Wayne, Indiana meant one thing: baseball. He and other neighborhood kids would find an empty lot, choose sides and improvise rules based on the number of players and the equipment available — and play until it got dark outside.

“The smell of fresh-cut grass still reminds me of summer,” said Dempsey, now a doctoral student in environmental toxicology at the University of Washington School of Public Health.

Many lessons were learned playing sandlot ball. It took dedication to learn the fundamentals; diplomacy to keep every player happy; imagination to think up different ways to play the game; and inquisitiveness to solve problems without adult supervision.

Now Dempsey is bringing this same creativity and curiosity to the School’s Department of Environmental and Occupational Health Sciences, where he is playing in a different sort of sandlot. He’s exploring the gut microbiome – what some have called “a scientific frontier” – and working to understand how this living, breathing, highly complex ecosystem shapes human health and disease.

Dempsey was recently named the School’s 2019-20 Magnuson Scholar. He is one of six students from the UW Health Sciences schools who will receive $30,000 each for their education.

The gut microbiome is the name given to all the microbes, fungi and viruses, along with their genetic material, that live in the intestine. Our gut microbiota contains tens of trillions of microorganisms, including several hundred different species of known bacteria with more than three million genes. This ecosystem can affect everything from our weight and allergic responses to our mental health.

“There is so much we still don't know about the gut microbiome,” said Dempsey, who received his MPH from Indiana University Bloomington. “We need to think outside the box, because we’re trying to imagine something beyond what is known, what is possible.”

Over the past decade, scientists have identified the gut microbiome as an important factor involved in obesity. Additionally, changes in the composition of gut microbiota have been linked to heart disease and neurodegenerative diseases such as Parkinson’s. Some speculate that if the microbiome is adjusted, it could decrease the risk for Alzheimer’s disease, atherosclerosis or diabetes.

What is less understood is how environmental exposures early in life can affect the gut microbiome and increase a person’s risk for these health outcomes. This is where Dempsey’s dissertation work comes in.

He is looking at how the gut microbiome and the liver develop together over time. The liver is typically the primary site of detoxification; however, the gut and its associated microbes play an incredibly important role in filtering and detoxifying materials not meant to be in the body.

He is also testing to see how early exposure to environmental toxicants and drugs might alter microbial communities in ways that could impact health later in life. To do this, he uses both conventional mouse models (those with a microbiome) and germ-free models (those without any bacteria). All of his work is done alongside his mentor Yue "Julia" Cui, an assistant professor of environmental and occupational health sciences, and other researchers in her lab.

“I feel that it is truly a blessing to work with Joe,” Cui said. “He is a highly motivated, ambitious and hard-working student who has already demonstrated great potential on the path to becoming a successful researcher and educator.”

Dempsey’s lab studies and the work of several other research groups have shown that the presence of certain bacteria in the gut can impact our body’s ability to metabolize toxic chemicals or drugs. His research focused on an enzyme called cytochrome P450 3A4, which oxidizes small foreign molecules so they can be removed from the body.

“If certain bacteria are there, the expression of these enzymes could be really high, which means they're going to metabolize drugs and environmental chemicals at a higher rate,” Dempsey explained. “If the bacteria aren't there, the expression of these enzymes is a lot lower, so they are not going to metabolize these drugs very efficiently.”

This finding, among other research, pokes holes in the age-old belief that all bacteria are dangerous. For centuries, humans have drawn a strong link between bacteria and illness, and for good reason. Deadly outbreaks from the bubonic plague and leprosy to anthrax, tuberculosis and cholera can all be traced back to these adaptive microorganisms. However, mounting evidence has shown that the bacteria that make up our gut microbiome are crucial to our survival.

The ultimate goal, according to Dempsey, is to show that certain bacteria are producing a therapeutic effect in humans. “If we can do this, we would be able to target these specific bacteria in order to alleviate a certain condition,” he said. “Imagine a magic, natural pill of a bacteria that produces a metabolite that could prevent obesity or reduce diabetes risk.”

In another study, a collaboration with Sheela Sathyanarayana from the UW and Seattle Children’s, Dempsey and others are trying to understand how an age-specific change in the composition of the gut microbiome might alter liver function and cause developmental change. For example, infants delivered naturally are exposed to the vaginal microbiome. If a baby were delivered through Cesarean section, they would instead be exposed to bacteria that live on the skin. The way a child was delivered – as well as whether they were exposed to a toxic chemical or have taken macrobiotics for a certain condition – may alter the microbiome and affect their health. This study seeks to understand how that happens so that therapeutics can be identified to help re-establish the microbiome in a way that could prevent disease.

This sort of research takes a lot of ingenuity and often requires scientists like Dempsey to make wild theories, only to try to disprove them. When he has a creative block, Dempsey puts everything down and goes for a walk outside. In fact, Dempsey tries to spend as much time outdoors as possible. He enjoys going on runs, hiking and playing recreational sports. No, he doesn’t have time to play baseball anymore, but the lessons he learned from that team sport still linger.

Dempsey was voted by SPH students last year as the Outstanding Teaching Assistant. He is known for using environmental themes from popular culture, including Dr. Seuss’ “The Lorax,” to illustrate classroom lessons. As a graduate research assistant in the Cui lab, he provides guidance to several undergraduate students.

“I like seeing the understanding in a student when they finally get it,” he said. “It’s a good feeling to know that a student understands something and that they can pass the knowledge on to someone else, especially in this public health field, where communicating about what you’re doing is so important.”

Dempsey was drawn to public health because he liked the idea that he could apply the science he was doing to impact change in a public setting. His long-term goal is to stay in academia and continue doing cutting-edge research that could improve the ways we prevent disease and promote well-being.

“I love public health because it goes beyond scientific discovery and pushes us to use what is discovered for a greater purpose,” he said.