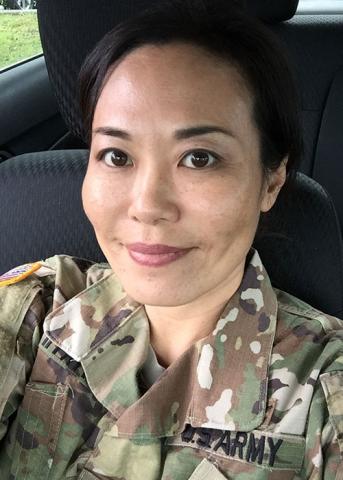 Military pilots are often responsible for the lives and safety of others, but they, too, face a variety of unique health risks.

Marian Hyatt, a physician in the United States Army, recalls a helicopter pilot who had partial numbness and weakness on the top of his left foot. The condition was most likely due to nerve damage resulting from frequently resting his knee against a lever that controls the ascent and descent of the aircraft.

“After nearly 2,000 hours of flying and bracing this lever, he gave himself foot drop,” Hyatt says. People with foot drop struggle to lift the front portion of their foot, which causes the toes to drag along the ground while walking. Hyatt is driven to prevent such occupational and environmental injuries, which is partly why she is seeking further educational training at the University of Washington School of Public Health.

She is pursuing a Master’s of Public Health (MPH) through a partnership between the School’s Department of Environmental & Occupational Health Sciences and Madigan Army Medical Center on Joint Base Lewis-McChord. She is one of three physicians from the base in this year’s Preventive Medicine residency program, a two-year training led by Madigan.

“My work outside of patient care was to monitor potential occupational safety and public health issues, effectively communicate that perspective with our non-medical leaders and present reasonable solutions,” Hyatt says. “Much of this fell under the realm of preventive medicine.”

Hyatt will spend nine months at the School full time, learning about the evaluation, treatment and prevention of diseases related to environmental and occupational exposures. She will return to Madigan during her second year to work with patients in both the occupational and preventive medicine clinic. Initially, most physicians who complete the program will serve as consultants to local military leaders and department chiefs of preventive medicine clinics at smaller Army hospitals.

Hyatt obtained her medical degree in 2008 from George Washington University through an Army scholarship and completed her internship at Walter Reed National Military Medical Center. She served for six years as a flight surgeon, which is “a hybrid of primary care provider, preventive medicine and occupational medicine,” she says. She's been on various deployments and missions across parts of South America, Africa and the Middle East.

Flight surgeons are employed in both the military and non-military setting, providing care to a variety of aviation personnel including pilots, navigators, air traffic controllers and even astronauts. Contrary to the title, flight surgeons do not typically perform surgery.

Hyatt spent most of her formative years on U.S. Air Force bases in Japan, where her father served as a base civil engineer after his active duty obligation was complete. She fell in love with aviation at a young age and dreamed of one day being a pilot. Unfortunately, she had poor vision and the military did not consider her a fit candidate. She was elated when given the opportunity to become a flight surgeon.

“One of my goals was to give back to the aviation community in which I grew up,” Hyatt says. “Being entrusted with their health and well-being was my way of fulfilling that goal.”

Hyatt notes that the population of pilots is generally healthy, but that flight-specific environmental exposures, such as altitude, may affect a healthy body.

Pilots are exposed to various occupational hazards, such as hearing loss due to noise from the engine or weapons systems. Hyatt’s pilots commonly complain of lower back pain, some of which may be associated with vibrations from the aircraft, posture, wear of heavy body armor on deployments and cockpit design.

“I realize that redesigning an entire cockpit is a complex process that can take years,” she says. “I hope to learn more about ergonomics to look for potential solutions to protect pilots from long-term injury and illness.”

“Having Madigan physicians in MPH-OEM classes is such an asset for the UW's OEM program, both for the occupational medicine residency and for the degree," says Dr. Debra Cherry, director of the UW's Occupational Medicine Residency. "The rich experience and special knowledge of flight surgeons such as Dr. Hyatt adds richness and perspective to class discussions that we would otherwise miss."