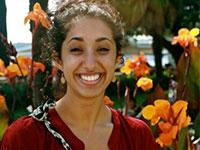 Nadia Arang (BS, Microbiology, Minor, Global Health 2014) began full-time work at Seattle BioMed just a week after graduating from the UW. She researches how malaria parasites get inside the human liver, where they grow and multiply. "The research has a very clear and direct impact on human life," Arang says. "It's very easy to stay engaged."

Arang had her foot in the door long ago, taking part in Seattle BioMed's summertime BioQuest Academy when she was in high school. During college, she was hired to work 10 to 20 hours a week. "I was a mosquito farmer," says Arang, noting the need to raise hundreds of thousands of the insects to harvest the malaria parasite. After a year, she became a research technician, which has now turned into the full-time job.

Arang plans to work for a couple of years, then pursue graduate studies. In the meantime, she plans to continue her ties to the UW's Global Health Undergraduate Leadership Committee by mentoring other global health students.