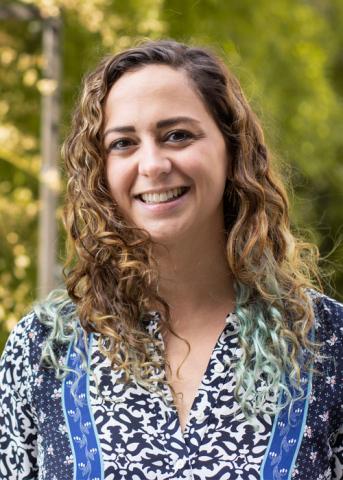 Opioid use disorders are highly prevalent among those who are incarcerated, yet use of medications to treat harmful patterns of opioid use is very low in criminal justice settings such as jails and prisons. So what gives – and what impact does this have on population health? Haylea Hannah is driven to find out.

A doctoral student in epidemiology at the University of Washington School of Public Health, Hannah is embarking on a study to understand access to medications for opioid use disorder treatment, such as methadone, buprenorphine and naltrexone, in the criminal justice system. Her dissertation was funded recently by the National Institute of Justice through a more than $145,000 graduate research fellowship, the largest awarded this fiscal year by the agency.

Hannah’s commitment to public health research and practice was celebrated in early October, when she received the Exceptional Student Award from the Washington State Public Health Association.

How prevalent are opioid use disorders among the criminal justice population?

What do you hope to learn from your dissertation?

For one aim, I will be collaborating with the Marin County Department of Health and Human Services to conduct focus groups in several California counties with individuals who had prior exposure to the criminal justice system, for example, through incarceration in the county jail. I’m interested in understanding individuals’ experiences continuing and initiating treatment during incarceration, and if they were forced to stop treatment, how that influenced their perceptions towards treatment in the future.

I’m also conducting key informant interviews with individuals who provide services for those living with an opioid use disorder throughout California to learn about perceptions towards and experiences with providing this type of treatment in criminal justice settings. An additional two aims will focus on evaluating these policies at the population level quantitatively by comparing settings that do and do not provide medications for opioid use disorder treatment in county jails and evaluating the cost-effectiveness of this intervention. My dissertation chair, Ali Rowhani-Rahbar, has been integral to this work.

This analysis will hopefully provide evidence for how increased access to treatment in the criminal justice system might influence population-level crime rates and health outcomes. Additionally, the mixed methods nature of the study provides additional insight into perceptions towards treatment in these settings and the cost-effectiveness of this policy.

How did you carve out this niche research focus around opioids and the criminal justice system?

I’ve always been interested in work that would inform policy development, and I am passionate about ensuring equitable access to what we know is effective treatment for opioid use disorder. I had been working at the Marin County health department for a few years and while there, was engaged in a number of opioid-related projects. I saw some glaring gaps in opioid treatment and policy and a greater need to understand the impacts at a population level.

Tell us about these gaps.

Correctional institutions have a mandate to assure equivalence of care between those who are incarcerated and those living in the community. Historically, this equivalence of care has not been met for opioid use disorder treatment. This is a really complicated epidemic that requires a multi-sectoral response, and both the criminal justice and public health communities are working to understand the best solution to prevent further harms. Although many issues likely influence this treatment gap, some have pointed to stigma towards those living with an opioid use disorder, a lack of resources, logistical challenges coordinating continued care as jail sentences are often shorter than one month, and preferences for drug-free treatment as contributing factors.

How does this play out in the real world?

This might mean that someone who was receiving methadone while living in the community may not receive the same treatment if they become incarcerated. That person is suddenly forced into withdrawal from methadone, which can be really painful and dangerous. This experience might then prevent that person from wanting to go back on treatment when they re-enter the community from incarceration. This may impact individual experiences with treatment and a return to opioid use and influence important health outcomes, such as an increased risk of death.

You’re from Raleigh and you went to school in Atlanta. How did you end up in Marin County?

Before coming to the UW, I completed an applied epidemiology fellowship at Marin County Health and Human Services through the Council of State and Territorial Epidemiologists (CSTE) and the Centers for Disease Control and Prevention.

What does the opioid epidemic look like in Marin County?

Marin County is often named one of the healthiest counties in California, but when you look closer, there are a lot of extreme disparities within the county, both in terms of income and health. Although Marin County has not be affected as deeply as many other communities in California and nationwide, we’ve observed disparities in opioid-related outcomes and in access to treatment, and we view every opioid overdose death as preventable.

What impact has your work had in Marin County?

One of the most impactful things was bringing a new data source into the county’s routine surveillance to better understand co-occurring drugs involved in fatal overdoses. I conducted an assessment of how we might be able to use toxicology data from the Office of the Sheriff-Coroner in our routine fatal drug poisoning surveillance system. I also developed code that allowed us to automatically process PDF toxicology reports to relieve the burden of manual data entry.

What are you most proud of in your time at the UW so far?

You recently traveled to Japan for a Multi-Hazards Summer School. How did that fit into your doctoral work?

Along the same lines, I wanted to learn how we can create partnerships between academia and applied public health agencies and other sectors, in this case to improve disaster preparedness and response. We have so much to learn from each other across sectors and international barriers. The summer program was hosted by the International Research Institute of Disaster Science at Tohoku University in Sendai, and it drew upon lessons learned from the 2011 Great East Japan Earthquake and Tsunami.

How are you applying what you learned to your work now?

I’m part of a collaborative team from SPH and the School of Nursing that is developing an exploration seminar in Sendai for undergraduate and graduate students – a summer program in disaster preparedness, mitigation, response and recovery with a focus on understanding individual, family and community health impacts of disasters. This fits in with my broad interests in bridging the academic and public health practice worlds.

What was your most memorable experience from Japan?

I loved being able to explore and experience Northeastern Japan and Sendai while learning from such a phenomenal group of SPH and Nursing faculty. One of my most memorable experiences was riding in a storytelling taxi with someone who was in the Tohoku region during the 2011 Great East Japan Earthquake and Tsunami. We visited several sites that were affected by the tsunami and heard firsthand accounts about how it felt to live through that experience. It was really powerful to visit communities along the coast, to learn about the social and cultural impacts of these disasters, and to see how these communities have coped post-disaster.